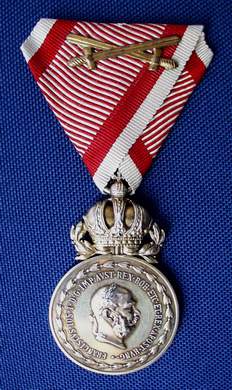 The original Military Merit Medal commonly known as the "Signum Laudis" was introduced by Kaiser Franz Joseph on the 12th of March 1890 as a sign of His Majesty's praise and recognition (allerhöchste belobende Anerkennung) for outstanding achievements in war and as a sign of his satisfaction for excellent service in peace. The award was for commissioned officers and was in bronze. The obverse bore the picture of the Kaiser and the reverse the motto SIGNUM LAUDIS within a laurel wreath. The award for wartime achievement was worn on the ribbon of the Bravery Medal and that for service in peace on a red ribbon 3.75cm in width. Both were worn on the left breast. On the 26th of March 1911 a further award was sanctioned -  a medal in silver for repeated actions worthy of the Royal praise (neuerliche allerhöchste belobende Anerkennung). A Royal decree of the 1st April 1916 introduced bars for second and third awards of the Silver Merit Medal and further introduced a new grade altogether. This was the Große Militärverdientsmedaille which as its name suggests was somewhat larger and additionally had a laurel wreath around the Crown. The whole medal was in a gold finish. The Große was said to be an expression of His Majesty's especial praise and recognition  (besondere allerhöchste belobende Anerkennung) and was awarded to only thirty individuals including Kaiser Karl. Four of these individuals additionally received a bar to the award . On the 13th of December 1916 the addition of Crossed Swords in gold were  permitted for the Bronze, Silver and Große Military Merit Medals. In the case of medals without bars these were worn directly on the ribbon. If a recipient had a bar to his award, the Swords were affixed to the bar. The award of bars to the Große was also introduced on the 22nd February 1917.  In April 1917 new awards bearing the new Kaiser's portrait were introduced. With this final pattern the model of the crown was changed to that of a double crown to reflect both the Austrian Empire and the Kingdom of Hungary.

Awards of the Large or Große Militärverdienstmedaille:

Repeat Award of the Große Militärverdienstmedaille  (Neuerlich ) = bar on the ribbon:

Finally Kaiser Karl also wore the Große Militärverdienstmedaille with Swords but no award date or information is available.

Back to Orders and Decorations