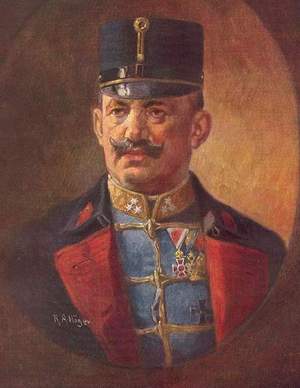 The late Generaloberst was born as Samu Khon at Rimaszombat (Hungary) on the 26th of December 1851. When his father converted to Christianity he also converted using the name Khon-Hazai but in 1876 he finally changed his name into Samuel Hazai. His military career started at the Hungarian Ludovika academy in Budapest which he left as a Kadett in the 51st Honvéd infantry battalion on the1st of November 1874. On the1st of May 1876 he was commissioned as a Leutnant in the active ranks of the Hungarian Honvéd. From 1879 to1881 he attended the Kriegsschule at Vienna with "excellent success" and was promoted to Oberleutnant on the 1st of May 1883. Hazai married Maria Juhasz with whom he had two sons and one daughter. In the year 1886 he received his first employment at the Hungarian Honvéd ministry. With only short interruptions at troop duty with the Hungarian Honvéd, he performed the majority of his military career in this ministry. His theoretical talent was soon recognized and he became an instructor at the k.u. Ludovika academy. In 1888 he was promoted to Hauptmann 2nd class, on the 1st of September 1889 to Hauptmann 1st class, to Major on the 1st of May 1895 and on the 1st of November 1897 to Oberstleutnant. In March 1900 his achievements as an instructor were rewarded by the award of the bronze military merit medal (Signum Laudis) and he was transferred as an instructor to the school for senior officers of the Honvéd (k.u. Landwehr-Stabsoffizierskurs) shortly followed by his promotion to Oberst on the 1st of November 1900.

In 1902 he took assumed command of this school and was now responsible for the quality of the education of all senior officers of the Hungarian territorial forces. His excellent efforts there were honored by the award of the 3rd class of the iron crown order in June 1904. In autumn 1904 he returned to the Honvéd ministry as Sektionschef or section chief of the 1st department. On the 1st of May 1907 he was promoted to Generalmajor and honored with the award of the knights' cross of the order of Leopold on the 10th of April 1908. The Hungarian prime minister Tisza was very impressed by his work and ideas for the Hungarian Honvéd and protected him from any "political ambushes". When Erzherzog Franz Ferdinand and Conrad von Hötzendorf started to reorganize the whole armed forces they made the modern thinking Georgi the Austrian defence minister and - not really surprising - Hazai his Hungarian equivalent. Both young generals stood for the "new period" of the territorial forces. In January 1910 Samuel Hazai was appointed Hungarian Honvéd minister followed by his promotion to Feldmarschall-Leutnant on the1st of November 1910 and the title of Geheimer Rat (Privy Councillor) in December of the same year. Similar to Georgi, he increased the quality of the officers' education within the Hungarian forces and attempted to get more money out of his government. But the Hungarian politicians were not so generous with their money! In March 1913, five years later than Georgi, Hazai was able to create an honvéd artillery force: 2 field gun regiments (Feldgeschütz-Regimenter), each of 5 guns, and 8 independent field gun detachments (Feldgeschütz Abteilungen) with 2 guns each. Hazai's achievements were rewarded by his ennobling to the Hungarian rank of Baron on the12th of December 1912 and by the award of the1st class of the iron crown order on the 12th of August 1913. Additionally he received the following foreign decorations: the grand cross of the Spanish military merit order (1909), the Prussian red eagle order 1st class (1910) and the 1st class of the Montenegrin Danilo Order. 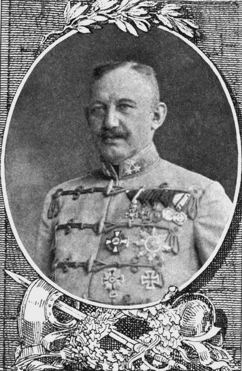 It was in the nature of a defence ministers post to be more a politician than an officer but in the circumstances of Hazai's  Hungarian appointment,  politics was the predominant factor. When the war started in 1914 Hazai, meanwhile promoted to General der Infanterie on the1st of November 1914, especially had his problems with the Hungarian politicians. They always thought that the Hungarian part of the monarchy had to pay more money for the war and that more of their soldiers died than all others. This was objectively not true but some circles in Hungary hated the Dual monarchy so much that they were prepared to risk losing the war in order to damage the Habsburgs. Hazai's troublesome duty was now on the one hand to fulfill his duty and to send the much needed new materiel - men and equipment  to the field and on the other hand to calm down the Hungarian opposition leaders playing with treasonable ideas. At times it seems that only the Kaiser and the Hungarian prime minister Tisza supported him during his "mission impossible"! On the 3rd of February 1915 he was awarded the military merit cross 1st class with war decoration followed be the award of the merit star of the Red Cross with war decoration. In June 1916 he received the grand cross of the order of Leopold, shortly followed by the award of the war decoration to this decoration on the 10th of August 1916. On the 25th of November 1916 he was awarded the large golden military merit medal (Großes Signum Laudis) and the title of Oberstinhaber of the k.u.k. infantry regiment number 46 by the Kaiser. His troublesome position seems clear if one noticed that General Hazai, as one of the most important Hungarian ministers never received the Hungarian Order of St. Stephan! The allied countries honored him during the war with the following awards: the Prussian iron cross 1st and 2nd class (1915), the grand cross with swords of the Bavarian military merit order (1915), the grand cross of the order of the crown of Württemberg (1916), the grand cross with golden star and swords of the Saxon Albrechts order (1916) and the Ottoman Medschidj order 1st class, the golden Imtiaz medal and the iron half moon - all three in 1917.

The problem with the supply of men and materiel grew ever worse, especially in Hungary, so that the new Kaiser of Austria and King of Hungary Karl made the decision to appoint GdI Hazai to be "Chef des Ersatzwesens für die gesamte bewaffnete Macht" (Chief of replacement services for the entire armed services). It was a wise decision to combine the authority regarding supply and replacement together in the hands of one man and to choose an Hungarian for this post. Not so wise was that the Kaiser decided the appointment spontaneously without informing any other authorities like ministers and the high commands which had previously dealt with supply and replacement issues and consequently Hazai had more unexpected problems than planned at the outset. On the 19th of February 1917 the Kaiser released him from the function of the Honvéd minister, simultaneously awarding him the large golden military merit medal (Großes Signum Laudis) a second time, to give him more time for his new post. It was due to Hazai's diplomatic talents that he had succeeded in overcoming the early problems with his new appointment. On the 1st of November 1917 he was promoted to Generaloberst with seniority from the 11th August of 1917. Relatively soon he built a Zentralstelle for supply at Vienna and so-called Exposituren or branch office with each higher command in the field and at home. For his outstanding efforts he was honored with the award of the military merit cross 3rd class with war decoration in brilliants on the 12th of August 1918.

Until the end of the war Generaloberst Samuel Freiherr von Hazai stayed at his important post and did his duty. After the collapse he settled down in Budapest where he died on the13th of February 1942.