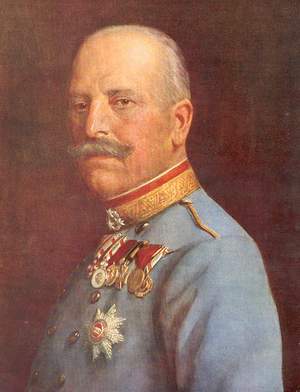 Friedrich Georgi was born on the 27th of January 1852 in Prague. As the son of a retired Oberst he was destined for a military career. After attending the cadet institute at Hainburg he successfully passed through the military academy at Wiener Neustadt and was commissioned as a Leutnant in Feldjšger Bataillon Number 6 on the 1st of September 1871. Following his promotion to Oberleutnant in May 1877 he was able to pay his "Heiratskaution" and marry Bertha Stamm in 1878. This marriage produced four children but two died in infancy. From 1879 to 1881 he attended the Kriegsschule at Vienna  followed by action in 1882 as a general staff officer of the 5th Gebirgsbrigade during the rebellion in Herzegovina. After this campaign Oberleutnant Georgi was honored with the "AllerhŲchste belobende Anerkennung" which allowed him to wear the bronze military merit medal (Signum Laudis) on it's introduction in 1890 and when the swords were introduced in 1917 for this award, he finally received them also.

In May 1884 he was promoted to Hauptmann 2nd class followed by his advancement to1st class in November 1885. After his attachment to the LandesbeschreibungsbŁro (military mapping bureau) and the general staff of the 4th corps Georgi performed a stint of duty with the troops with infantry regiment number 27 from 1890 until  his appointment to chief of the general staff of the15th infantry division on the 17th of March 1891, shortly followed by his promotion to Major on the 1st of May 1891. In February 1893 he was appointed as an instructor at the school for senior officers (Stabsoffizierskurs) and following a short period of troop duty with infantry regiment number 100 he was attached to the Pršses der Kommission zur Beurteilung der Stabsoffiziersaspiranten. (The president of the commission for determining suitability for the promotion to field officers' rank). After his promotion to Oberstleutnant on the 1st of May 1894 he became the president of this commission himself and was honored for his efforts there with the Military Merit Cross in October 1898. On the 31st of December 1896 Georgi was promoted to Oberst. From 1898 to 1903 he was department head of the 10th department of the war ministry. By this time Oberst Georgi had received a great deal of recognition from all of his commanders. Especially General Albori and the chief of the general staff General Beck had given him excellent reports. One of his talents was to both rapidly and successfully master completely new situations and this and his personality gave his superiors and also his subordinates the feeling they could trust him implicitly.

On account of his 30 years of duty as an officer, including one campaign, Oberst Georgi was ennobled with the predicate "Edler von" on the 1st of November 1901. In the Spring of 1903 he assumed the command of the 42nd (Landwehr) infantry brigade having being honored with the order of the iron crown 3rd class for his achievements as chief of the 10th department in January and shortly followed by his promotion to Generalmajor on the 2nd of May 1903. On the 18th of July 1906 he became a section chief in the k.k. Landesverteidigungsministerium (Landwehr defence ministry) . He soon became well known for his brilliant speeches, memorandums and reform suggestions. He was one of those younger and modern thinking generals centred around Erherzog Franz Ferdinand and his military academy classmate Conrad von HŲtzendorf  who were determined to reform the old army into a modern fighting force. On the 1st of December 1907 Friedrich Edler von Georgi, meanwhile promoted to Feldmarschall-Leutnant on the 1st of May 1907, was appointed to be the k.k. minister of defence (k.k. Landesverteidigungsminister) and was now responsible for all Austrian territorial armed forces including the k.k. Gendarmerie. At this time the k.k. Landwehr was the "unloved appendix" of the k.u.k. army, only built as counterpart to the Hungarian Honvťd, with little money, low education and old material. Feldmarschall-Leutnant Georgi started to change this! With brilliant speeches to the Reichstag he was able to get more money for his ministry which gave him the possibility to modernize the equipment and to build the k.k. artillery. To increase the quality of the officers' education he dissolved the Landwehr-Kadettenschulen in 1912 and created the k.k. Franz Joseph-Militšrakademie with the same quality standards as the Theresian military academy at Wiener Neustadt and the k.k. Militšr-Oberrealschule for pre academy education. Both schools had one commander but different teaching personnel. Together with his personal friend, the chief of the general staff Conrad von HŲtzendorf he created the so called "Landwehr-Gebirgstruppen" specially trained for warfare in the mountain regions. In long, difficult and troublesome negotiations between the k.u.k. Kriegsministerium and both governments, Georgi, meanwhile promoted to General der Infanterie on the 2nd of November 1911, was able to introduce bills for a new Wehrgesetz and a new Landwehrgesetz. (Defence Laws). These two laws were signed by the Kaiser on the 5th of July 1912 and brought the Landwehr organization to total equality - in equipment, armament, organization, development etc. - to the standard of the k.u.k. army. When the war started in 1914 it was to Georgi's credit that the k.k. Landwehr had reached all these targets while the Hungarian Honvťd was still lagging behind.

This period of hard political work before the war brought many honours to General Georgi. He was awarded the order of the iron crown 1st class on the 9th of March 1909, the grand cross of the order of Leopold on the 12th August 1913 and honored with the title Geheimer Rat (Privy Councillor) on the 4th of August 1908. H was further appointed to be  the Oberstinhaber of infantry regiment number 15 and ennobled to "Freiherr von" on the 9th of September 1912. From foreign countries he received the 1st class of the Prussian order of the red eagle in 1908 and the 1st class of the Bulgarian St. Alexander Order in 1912. 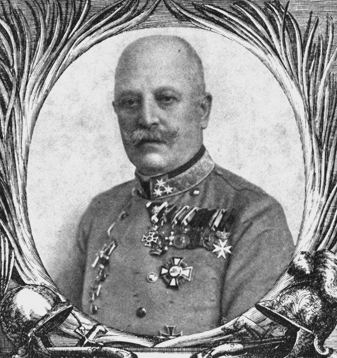 Following the outbreak of war in 1914 General Georgi immediately volunteered for a command appointment in the field but this, and later suggestions in this direction were always refused - he was too valuable at his half military-half political post as a minister. During the following years of war his outstanding talent of organization was often recognized. He was promoted to Generaloberst on the 6th of May 1916, received the military merit cross 1st class with war decoration on the 3rd of February 1915, the war decoration to his formerly received grand cross of the Order of Leopold on the 10th of August 1916, the large gold military merit medal (GroŖes Signum Laudis) on the 25th of November 1916 and a second award on the 3rd March 1918. His active support of the medical care of wounded soldiers was recognized by the award of the merit star of the Red Cross with war decoration on the 8th of March 1915, the Magistral-Grand cross of the Malteser Ritterorden in 1915, the neck badge of the Marianer cross of the Deutschen Ritterorden and the Prussian Red Cross medals 3rd and 2nd class both in 1916. The allied countries honored him with the following awards: the Prussian iron cross 2nd and 1st class (1914), the grand cross of the Bavarian military merit order with swords (1915), the grand cross with swords of the order of the crown of WŁrttemberg (1916), the grand cross with golden star and swords of the Saxon Albrechts order, the Ottoman iron half moon (1917), the golden Imtiaz medal (1917) and the Medschidje order 1st class (1916).

He was known as an excellent "bureaucratic manager" and so he was one of the few ministers Kaiser Karl asked to stay. On the 31st of March 1917 the city of Leitmeritz made him an EhrenbŁrger or honorary citizen. Only with the fall of the cabinet of Prime Minister Heinrich Count von Clam-Martinitz in July 1917 did his position as Landesverteidigungsminister come to an end. Generaloberst Georgi, who was made a lifelong member of the upper house of the Austrian Reichstag in 1917, saw no further chance for a field command and so he asked Kaiser Karl to allow him to be placed "at disposal". The Kaiser did so and honored him with the second award of the large golden Signum Laudis. Generaloberst Friedrich Freiherr von Georgi  parted from politics and settled down at Vienna where he died on the 23rd of June 1926.