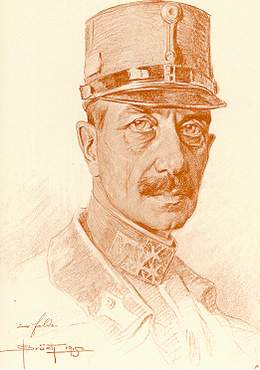 Field Marshal Eduard Baron von Böhm-Ermolli was born on the 12th February 1856 in Ancona. His father, Georg Böhm, a former senior non commissioned officer and Silver Bravery Medal holder had risen through the ranks and had been awarded a commission for gallantry at the battle of Novara during the campaign in Italy in 1849. In retirement in September 1885 as a Major, he was raised to the Austrian nobility. The father had previously been permitted to add to his own, the maiden name of his wife thus becoming styled Böhm-Ermolli. Eduard Böhm-Ermolli attended the cadet school in St. Pölten followed by the Maria Theresa Military Academy at Wiener-Neustadt. Commissioned as a Leutnant on the 1st of September 1875 he was assigned to the 4th Dragoons stationed in Wels. In November 1878 he attended the General Staff course at the War School in Vienna and on successful completion was posted as a staff officer with the 21.Infanterie-Brigade at Lemberg. Through the following years he had a succession of appointments both at regimental duty and with the staff, his final regimental appointment being as commanding officer of Ulanen-regiment 3 based at Grodek in December 1896. He had been promoted to colonel the previous April. In succession he was commander of the 16th Cavalry Brigade at Preßbeurg (1901), the Cavalry Division at Kraców (Nov 1905) and the 12th Infantry Division (April 1909) also at Kraców. Promoted major general on the 1st of May 1903, lieutenant general on 1st November 1907 he was appointed commanding general of the I Corps at Kraców on the 7th November 1911 with promotion to General der Kavallerie six months later on 1st May 1912. At the outbreak of the First World War, Böhm-Ermolli was appointed commanding general of the 2nd Army which initially was to deploy to Serbia but in the event was moved Northeast to Galicia to take part in the difficult battles of the first Summer and Winter of the war in the East. He commanded 2nd Army for most of the war as well as simultaneously commanding an army group command in the East. He was promoted Generaloberst on 1st May 1916 and Feldmarschall on 31st January 1918. Raised to a barony on the 17th August 1917, the Field Marshal retired in November 1918 on the collapse of the monarchy to Troppau which became part of the new state of Czechoslovakia.  The Czechoslovakian government paid the Baron a pension and appointed him a General 1st Class in the reserve and in 1928 to Army General. With the re-annexation of the Sudetenland, Baron Böhm-Ermolli found himself a German citizen. He was honoured with the appointment as a "Charakter" or Brevet Generalfeldmarschall of the German army and in fact was the only former Austrian officer to achieve this rank in the Wehrmacht albeit in an honorary capacity. He continued to carry his old k.u.k. marshals' baton. Appointed colonel of the Troppau based Infantry Regiment 28 in October 1940, the 85 year old Field Marshal died on the 9th December 1941 and was given a state funeral with full military honours in Vienna at which Generalfeldmarschall Wilhelm Keitel represented the German state. Considered to be one of the most talented Austro-Hungarian field commanders, Baron Böhm-Ermolli was a Commander of the Order of Maria Theresa, holder of the Grand Cross of the Hungarian Order of Saint Stephen, Knight 1st Class of the Order of the Iron Crown, holder of the Grand Cross of the Order of Leopold and also the recipient of the Oak Leaves to the Prussian Order Pour le Mérite. 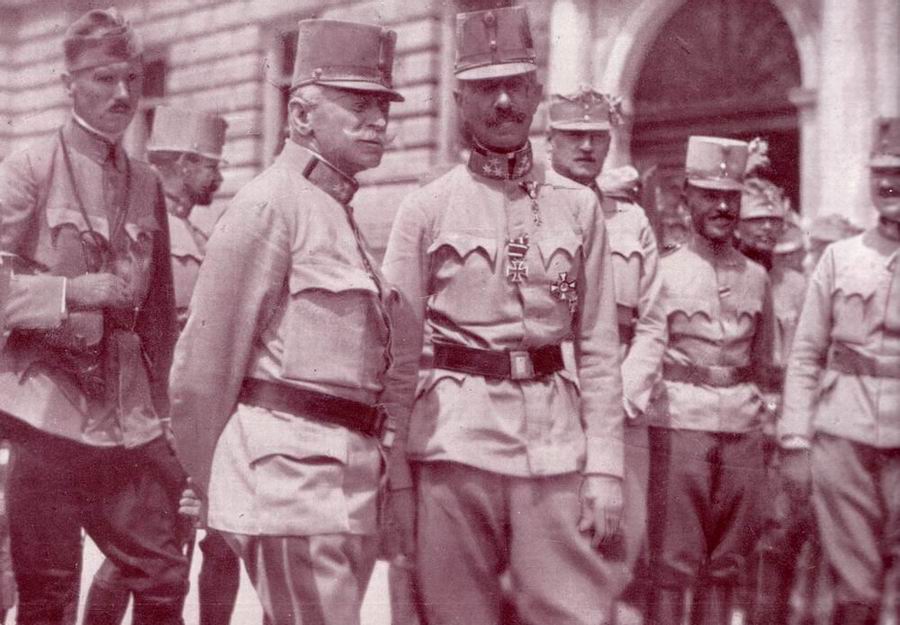