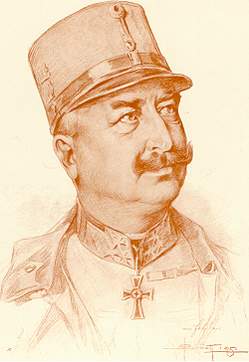 Franz Baron Rohr von Denta was born on the 30th October 1854 in Arad in the Kingdom of Hungary (now in Western Rumania). His grandfather had been a carpenter in Langendorf in Northern Bohemia. His father had enlisted as a regular soldier and progressed within ten years from private to Feldwebel. He was consequently commissioned as a paymaster and retired with the rank of Hauptmann-Rechnungsführer. Franz Denta attended the Theresa Military Academy in Wiener-Neustadt and on graduation in 1876 was commissioned as a Leutnant in the 3.Galizisches Uhlanen-Regiment Erzherzog Carl then stationed in Stockerau. After successfully completing the course at the war academy he was transferred into the general staff and by 1896 was a colonel. He was promoted major general on 1st of May 1903, commanded the 73.Landwehr-IBrig. at Preßburg (Pozsony) and in 1909 was appointed as the General Inspector of military educational establishments. Promoted General der Kavallerie in 1911, he was appointed commander of the Hungarian Landwehr (Honvéd) in1913. Following the outbreak of the war, General Rohr was given command of all troops from Graz to Innsbruck including Styria, Carinthia, Carniola, the Tyrol and Voralberg. Following Italy's entry into the war he successfully defended the Carinthian border with the troops of his "Armeegruppe Rohr" until February 1916 followed by 10.Armee until June 1916 and then 11.Armee until the following February. Whilst commanding 1.Armee, which he took over in Feb 1917, he was promoted to Feldmarschall on 30th January 1918 following the armistice with Rumania. He had been raised to the nobility on the 14th of April 1917 and took as his predicate the title Rohr von Denta. Among his other positions he was appointed to the honorific post of Captain of the Hungarian Trabantenleibgarde (Life Guards) and was the colonel of IR.48. Following the monarchy's collapse, Baron Rohr was appointed Field Marshal in the Hungarian army. Highly decorated, the Field Marshal counted among his awards the Military Service Cross 1st Class, the Grand Cross of the Order of Leopold and the Knights' Cross 1st Class of the Order of the Iron Crown. Baron Rohr died in Rodaun near Vienna on the 9th December 1927.