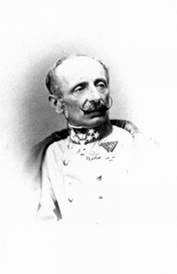 Although slightly deviating from the main time period of this site, I thought it might be useful to include an order of battle of the army of Austria-Hungary during the Austro-Prussian war of 1866 for those readers interested in the wider field of the history of the Austrian army. Geoffrey Wawro does not include any order of battle information in his recent book on that war and neither did Gordon Craig's long out of print  title. The order of battle reproduced in the English translation of the Prussian general staff history does not include the names of the regimental and Jäger battalion commanders and these have been added below. The names in the title of  the line regiments are those of the then current "Inhaber" or regimental colonel by which the regiment was generally known. Numerous brigade and regimental commanders were killed or wounded during the campaign and this Order of battle reflects the situation at the 15th of June 1866..

Note on noble predicates: Rather confusingly, many German nobles have two surnames connected by the predicate "von". For example Generalmajor Ludwig Freiherr Piret de Bihain. In most texts and histories these gentlemen are usually known by the first surname preceded by the predicate von i.e. von Piret and hence Brigade Piret.

Back to Orders of Battle