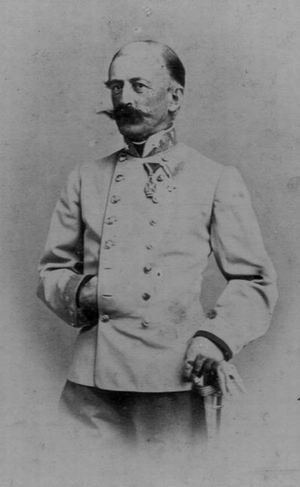 Ferdinand Poschacher was born on the 15th of May 1819 as son of the late Generalmajor Sebastian Poschacher von Poschach (enobled on the 30th September 1841) at Innsbruck. On the 31st of October 1829 he entered military education at the Military Academy at Wiener Neustadt which he left as a Fähnrich in infantry regiment number 7 at the end of June 1837. On his transfer to 5th Jäger battalion he was promoted to Leutnant on the 1st of December 1837. With this battalion he took part in combat against the insurgents in Galicia in 1846. On the 5th of June 1846 he was promoted to Oberleutnant with the additional attachment to the general staff corps where he received his promotion to Hauptmann on the 13th of June 1848. In the following year he took part in the Italian theatre as a staff officer in the division of Feldmarschall-Lieutenant Wilhelm Graf Lichnowski and would distinguish himself during the battle of Novara on the 23rd of March 1849 which lead to the award of the Military Merit Cross shortly after the end of the war. He also received the commendation of the Kaiser for his heroic performance on the 14th of July 1849. During the following years Ferdinand Poschacher von Poschach served at several general staff engagements, from 1853 to 1855 he was chief of the general staff of the 12th army corps, receiving his promotions to Major on the 10th of November 1849, to Oberstleutnant on the 23rd of May 1854 and to Oberst im Generalstab on the9th of May 1858. 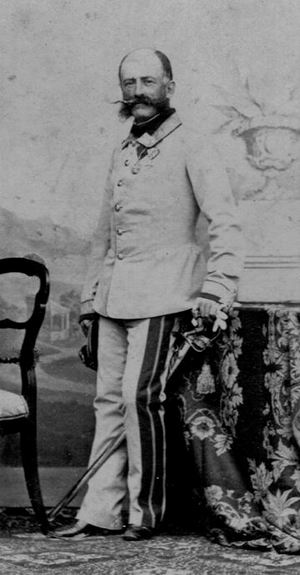 During the campaign of 1859 Oberst Poschacher von Poschach again had the possibility to distinguish himself during combat. For his excellent performance during the battles of Magenta and Turbigo he was honored with the award of the 3rd class of the Order of the Iron Crown with war decoration. On the 11th of November 1859 he was appointed commander of the 10th Jäger battalion at St.Pölten (Lower Austria) the famous "Kopal-Jäger" of Radetzky's Army of 1848. In 1859 this battalion had, again after 1848/49, covered itself with glory but had also suffered serious casualties. During the ensuing years Oberst Poschacher rebuilt this exhausted unit back to its former self with a return of the old elite spirit. On the 27th of June 1865 Ferdinand Poschacher von Poschach was promoted to Generalmajor and took over command of a brigade of the 1st army corps. When the war against Prussia started, the 1st army corps, commanded by General der Cavallerie Eduard Graf Clam-Gallas, entered the scene in the Northern theatre of Bohemia initially independent from the remainder of North Army which was grouping in Moravia. Poschacher's brigade consisting primarily of infantry regiments 30 and 34 and Feldjäger Battalion 18 commanded by Oberst Franz Bergou,  Oberst Carl Schwertführer and Oberstlieutenant Sigmund Tobias von Hohendorf respectively first saw action against elements of the Prussian 1st Army (15th Infantry Brigade under Generalmajor von Bose) during street fighting in the battle at Podol on the 26th of June 1866. The brigade suffered heavy casualties at the hands of the Prussian needle rifles and was withdrawn on orders of Graf Clam in the early hours. Following 1st Corps withdrawal to the area of Münchengrätz, Poschacher's brigade was ordered to Jicin (Gitschin) where it again engaged the Prussians on the 29th of June. After hard fighting at Jicin, Poschacher's brigade was compelled to withdraw after Prussian forces appeared to the rear and with the rest of 1st Corps retreated to the concentration area of Königgrätz where they met up with the bulk of North Army under Feldzeugmeister Ludwig Ritter von Benedek. Initially in reserve during the battle of Königgrätz on the 3rd of July 1866, Generalmajor Poschacher's brigade was committed to the attack on Chlum in the later stages of the battle. He was killed in action while gallantly leading his brigade and accompanying his 18th Jäger Battalion up the slopes of Chlum. Three times Poschacher's brigade had assaulted Chlum. It was in vain, Königgrätz and indeed the war was effectively lost. Poschacher's death made him, beside Generalmajor Gustav Edler von Fragern (at Skalitz) and Generalmajor Carl Schulz (at Königgrätz),  one of three Austrian general officers who were killed in action during this war. The war was contemporarily seen as a war between (German) brothers and Königgrätz was the largest and bloodiest battle during this campaign, the battlefield was so large and full of debris that his dead body could not be found for weeks. At last his widow who joined the horrible search managed find his mutilated body, identifying him only by a medallion around his neck! For his gallant conduct during the battle of Königgrätz he was honored with the award of the knight's cross of the Order of Leopold with war decoration on the 3rd of October 1866 - posthumously.