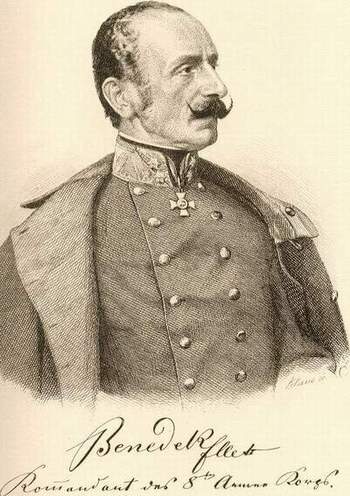 Ludwig von Benedek, a doctor's son was born on the 14th of July 1804 at Ödenburg (Sopron) in Western Hungary. As a fourteen year old boy he entered the Maria Theresa Military Academy at Wiener-Neustadt from which he graduated seventh in seniority as a Fähnrich with an assignment to the 27th Infantry Regiment on the 22nd October 1822. Commissioned as an Unterlieutenant on the 1st February 1825 he was posted to the 47th Infantry Regiment at Marburg (Maribor) with a further promotion to Oberlieutenant on the 15th March 1831. On the 28th July 1833 he was assigned to the General Quartermaster Staff with promotion to Hauptmann on the 20th April 1835. He was appointed to the staff of the General Command in Galicia at Lemberg (Lwów) as the Adjutant in the rank of Major on the 22nd May 1840 and was promoted to Oberstlieutenant whilst still in this post on the 22nd December 1843. During February 1846 there was considerable unrest in Galicia and Benedek achieved some fame for storming the town of Gdów and clearing it of insurgents. For this success he was awarded the Knights' Cross of the Order of  Leopold and further honoured by being made an honorary citizen of Lemberg on the 25th of May 1846. Promoted to Oberst on the 17th April 1846 he was appointed to the command of the 33rd Infantry Regiment on the 26th August 1847. With this regiment he participated in the war against Piedmont in 1848. In late March he was given command of a brigade in the newly formed division of Generalmajor Ludwig Edler von Wohlgemuth. The brigade consisted of two battalions of his former command - the 33rd Infantry Regiment Gyulai, the 2nd Kaiserjäger Battalion and Foot Battery Nr. 1.  Following FM. Radetzky's withdrawal from Milan and the subsequent fighting at Goito on the 30th of  May Benedek was awarded the Commanders' Cross of the Order of Leopold. This was followed by the award of the Knights' Cross of the Military Order of Maria Theresa for the storming of Curtatone on the 27th November 1848. The now Ritter von Benedek saw further action against the Piedmontese the following March at the battles of Mortara and Novara being promoted to Generalmajor on the 3rd of April 1849. During the Hungarian war of that year he fought at Raab on the 28th of June, Komorn (Komárom) on the 2nd and 11th of July, at Uj-Szegedin on the 3rd of August and at Szőregh on the 5th August. During the campaign in Hungary he was wounded three times including a severe wound received at Szőregh by a shell splinter. In appreciation of his services in Hungary he was made the Oberstinhaber or Regimental Colonel of the 28th Infantry Regiment on the 14th July 1849 and was awarded the Military Merit Cross on the 22nd of October. After recovering from his wounds he was appointed FM. Radetzky's Chief of Staff in Italy where he remained in post for the next seven years. He was promoted to Feldmarschalleutnant on the 26th October 1852 and after Radetzky's retirement he was appointed to command the II. Corps on the 14th March 1857 followed by IV. Corps on the 27th March 1857. By the outbreak of the war against France and Piedmont in 1859 he had assumed command of the VIII. Corps and it was with this unit that he would experience his greatest success so far and gain great fame as the Empire's premier soldier. It was at Solferino on the 24th June 1859 following the disastrous campaign against the Franco-Piedmontese forces that Benedek with his corps successfully covered the retreat of FML. Graf Stadion's V. Corps and prevented a flanking attack against the Austrian centre. For Solferino FML. Benedek was appointed a Commander of the Military Order of Maria Theresa at the 158th "Promotion" on the 17th October 1859. 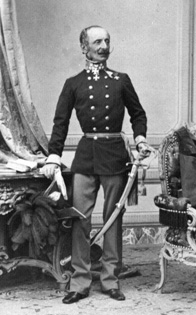 Advanced to the rank of Feldzeugmeister on the 27th November 1859 he was appointed Chief of the General Quartermaster Staff on the 31st of January 1860 followed by the Governorship of Hungary in April. On the 20th October 1860 he assumed command of the Austrian forces in Lombardy-Venetia, Carinthia, Carniola, the Tyrol and the Adriatic Coastland and was awarded the Grand Cross of the Order of Leopold with War Decoration on the 14th January 1862.

Much against his wishes he was appointed to the command of the Austrian Army of the North for the campaign in Bohemia against Prussia during the Summer of 1866. Having refused the appointment three times he finally acquiesced after a nocturnal visit of the Emperor's Adjutant-General to his Vienna hotel room. The campaign that followed against Prussia was disastrous for Austria and a personal tragedy for Benedek. With a combination of poor staff work, unimaginative leadership, disobedient subordinates and outdated infantry tactics the Austrian Infantry suffered greatly against the renowned Prussian needle gun and the brilliant General von Moltke. Following a series of defeats which culminated in the massive battle of Königgrätz on July 3rd 1866 the war was for all intents and purposes lost. Benedek conducted a skillful withdrawal and was relieved on July 26th at Pressburg. From 28th July to the 5th October he gave evidence at the commission of enquiry. Although found to have committed many grave errors the Feldzeugmeister was not court-martialled and retired after 44 years service to Graz on November 1st 1866.

Benedek's last service to his Emperor and country was to give a written undertaking on the 19th November 1866 never to speak or publish anything regarding the campaign in Bohemia and in this he kept his word. He was therefore mortified when a scathing article in the Wiener-Zeitung on 8th December held him alone responsible for the catastrophe and he had no right of reply. Personally extremely courageous and honourable, Benedek, a gifted Corps Commander was unsuited for Army command. The once first soldier of the Empire lived for another fifteen years in quiet retirement at Graz and died there on the 27th April 1881. The photograph to the right shows Ritter von Benedek with his Flügeladjutant or Aide de Camp Eugen Müller. Erroneously reported to have been killed in action at Königgrätz in Geoffrey Wawro's "The Austro-Prussian War", Oberstleutnant Müller survived to be the executor of Benedek's estate.