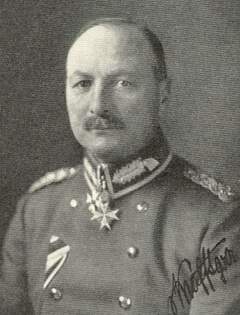 Following the breaking off of diplomatic relationships between Austria and Italy, the German high command decided to create a mountain warfare capable formation to assist Austria in the defence of her Southern frontier. This division sized formation was named as the German Alpine Corps (deutsches Alpenkorps). On the 19th of May 1915, Generalleutnant Konrad Krafft von Delmensingen, the former chief of staff of the Bavarian Army and a noted mountain warfare expert was appointed as its first commander. The Alpenkorps was officially founded on the 21st may 1915. After initial formation at Lech in Bavaria the Corps units were already being hurriedly dispatched by rail to the Austrian South Tyrol by the 25th May. The Austro-Hungarian commander in the Tyrol, General der Kavallerie Viktor Dankl had intended that the Alpenkorps would be deployed into the area of Bruneck -Brixen - Bozen- Auer to be used as a highly mobile operational strike force. However orders from the German OHL dated  the 4th of June 1915, stipulated that the Alpenkorps could only remain on Austrian territory as Germany and Italy were not yet at war. After some familiarisation and ski training, the Alpenkorps would spend the next five months deployed in Rayon V in support of Feldmarschalleutnant Ludwig Goiginger's "Pustertal" Division.

The structure of the Alpenkorps (which in reality was a J‰ger-Division) was on the 26th May 1915 as follows. Smaller divisional units can be found on the scanned illustration:

Both the brigade commanders as well as the corps (division) commander were later holders of the Prussian Order Pour le MÈrite and both Krafft von Delmensingen and Ritter von Tutschek were recipients of the Bavarian Military Max Joseph Order. 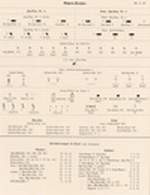 Back to Orders of Battle