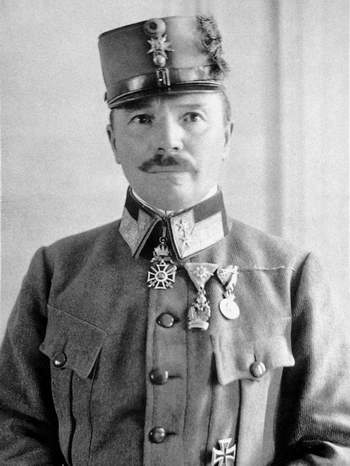 Ludwig Goiginger was born on the 11th August 1863 in Verona. After graduating from the high school in Salzburg he entered the Engineer Cadet School in Vienna from which he commissioned as a Leutnant in 1884 in Engineer Regiment Number 2 in Krems. After attending the War Academy from 1888 until 1890 he was assigned to the General Staff. During the next 22 years he served in various staff appointments. On being promoted to colonel in the General Staff Corps he was attached to the Turkish military at Ésk■b where he put into effect the organization of the Turkish Gendarmerie in Macedonia as well as the suppression of Macedonian guerilla activity. Promoted to major general on the 23rd of May 1912 he was given command of the newly formed 122nd Infantry Brigade at Bruneck in the same year. Prior to mobilisation the 122nd Infantry Brigade had been a Common Army formation within Feldmarschalleutnant Johann Freiherr von Kirchbach auf Lauterbach's 8th Infantry Division. However in August 1914 the headquarters was renamed as a Landwehr Infantry Brigade with six battalions of the crack Landessch■tzenregiment Nr.I under command and formed part of Feldmarschalleutnant Heinrich Tschurtschenthaler von Helmheim's 44th Landwehr Infantry Division in Third Army's XIV Corps. Goiginger was soon promoted to a divisional command - that of the 32nd Infantry Division within General der Kavallerie Eduard B—hm-Ermolli's 2nd Army. This division plus the 103rd Landsturm Infantry Brigade were placed under his command as Gruppe Goiginger during the fighting in the Carpathians from October 1914 and throughout the following winter. In the Spring he briefly assumed command of the 44th Landwehr Infantry Division then serving in XVIII Corps before being summoned personally by General der Kavallerie Viktor Dankl to assume the command of the Pustertal Division in Rayon V on the newly activated Italian front. Promoted to Feldmarschalleutnant on the 9th of May 1915 he assumed his new command on the 5th of June. He would remain in this hotspot on the Southwestern front until August the following year. Although the important position on the Col di Lana was lost on the 17th  April 1916, he successfully defended the strategically important Puster Valley staving off all Italian attempts to break into the Austrian hinterland. Switched to the Rumanian front, Goiginger assumed command of the newly formed 73rd Infantry Division within Bavarian Generalleutnant Krafft von Delmensingen's Group in the German Ninth Army. Following the successful conclusion of that campaign his division was transferred back to the Southwestern front directly under command of Army Group Conrad. He then took his division to the Isonzo front for the summer battles in the Monte San Gabriele sector in Generaloberst Boroević's Isonzo Army. He was awarded the Golden Bravery Medal for Officers for his leadership during the 11th battle of the Isonzo. For the autumn offensive (Caporetto) he was given command of the 60th Infantry Division within Group Kosak in the 2nd Isonzo Army of General der Infanterie Ritter von Henriquez. He shortly thereafter assumed command of Corps Goiginger which included his old 60th Infantry Division and the 55th plus elements of the 94th in the Monte Asolone sector. As commanding General of the XXIV Corps Headquarters he led his corps in the battle of Montello on the Piave river in June 1918. For the success of his corps in taking Montello he was awarded the Military Maria Theresa Order. Transferred with  to the Western front in July 1918 he fought the last months of the war against the Western allied armies commanding XVIII Corps under Army Group Gallwitz. One of the finest Austrian divisional and corps commanders, FML. Goiginger was additionally a Knight 1st Class of the Order of the Iron Crown and a Commander of the Order of Leopold. At the wars end he was the second senior Feldmarschalleutnant in the Austro-Hungarian Army. Feldmarschalleutnant Ludwig Goiginger retired to the neighbourhood of Graz and died there on the 26th August 1931.