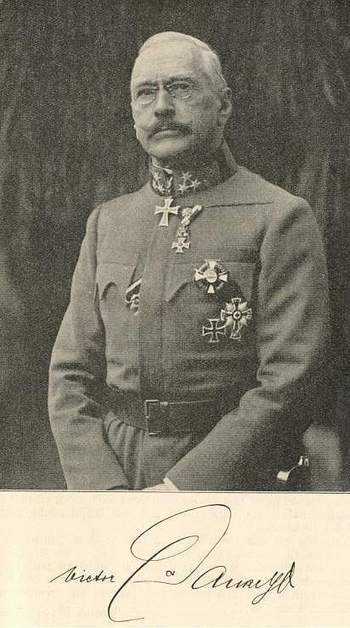 Viktor Dankl was born on the18th September 1854 at Udine in Venetia as the son of an army captain from Vienna. When his father retired in 1865, the family settled in G÷rz (Gorizia) from which Dankl attended the German Gymnasium there and later at Trieste. On completion of his studies at the Gymnasium he entered the Cadet Institute at St. P÷lten as a fourteen year old boy in 1869 followed by the course at the Maria Theresa Military Academy at Wiener-Neustadt in 1870. He was commissioned as a Leutnant in Dragoon Regiment K÷nig Albert Nr.3 in 1874 which was then garrisoned at Enns. From 1877 to 1879 he attended the War School in Vienna and on the 1st December 1880 was posted as a General Staff officer to the 8th Cavalry Brigade in Prague. In 1883 he was transferred to the Headquarters of the 32nd Infantry Division in Budapest being promoted to captain a year later. Over the following years he was employed at various staff appointments including the task of mapping the Tyrol and as a regimental officer in the rank of Oberstleutnant with the 11th Uhlans. Appointed Chief of Staff of the XIII Corps at Agram (Zagreb) in 1896 he became chief of the Central Office of the Austro-Hungarian General Staff at Vienna three years later. Promoted to Generalmajor on the 16th of May 1903 he was appointed to command the 66th Infantry Brigade at Komorn (Komßrom) within the 33rd Infantry Division of Feldmarschalleutnant Carl Edler von Rezniček. In 1905 he was given a further brigade command - that of the 16th Infantry brigade at Trient (Trentino). With a further promotion to Feldmarschalleutnant in 1907 he was appointed to command the 36th Infantry Division at Zagreb. Viktor Dankl's final assignment before the outbreak of the First World War was that of Commander of the Innsbruck based XIV Corps in February 1912 with responsibility for the Austrian Tyrol. A General der Kavallerie since 29th October 1912 Dankl was appointed Commander of the 1st Army on mobilisation in 1914. With 1st Army (I, V & X Corps) he achieved the first Austro-Hungarian victory of the war by defeating the Russian 4th Army at the battle of Kraśnik from 23rd to 25th August 1914 in Northern Galicia. For the three day battle of Kraśnik, Dankl was subsequently awarded the Commanders' Cross of the Military Maria Theresa Order at the 180th Promotion on the 17th August 1917. Due to the critical situation further to the East and the South he was compelled to withdraw his army to the North of Cracˇw in the general retreat to the line of the River Dunajec and spent the following winter in the see-saw battles that characterized the Eastern front at this period. Following the initial success of the Gorlice-Tarnˇw offensive in early May 1915 he was transferred to the Southwestern front to assume the command of the Tyrol's defences. With weak forces he successfully halted all Italian attempts to invade the Tyrol and was appointed to command 11th Army in March 1916 for the Spring offensive against the Italians in the Trentino. Promoted Generaloberst on the 1st May 1916 he led 11th Army in the advance to the South of Rovereto and to the Zugna Torta, took nearly the entire Val Arsa, the Col Santo Massif up to Monte Pasubio and the Posino Valley South of Arsiero.

On the 17th June 1916 he handed over his command to Gen.Oberst Freiherr Rohr von Denta on account of health reasons and underwent a throat operation. He was never again to receive an active command. He was appointed as the Captain of the Ersten Arcierenleibgarde in January 1917 and was raised to the nobility as a Baron (Freiherr) on the 17th August 1917. Taking the Predicate of Kraśnik, he was was further promoted to a Count (Graf) in the Autumn of 1918.  Following the collapse of the Monarchy Dankl retired and on the death of FM. Graf Conrad in 1925 became the Chancellor of the Military Maria Theresa Order in his place. Highly decorated, the Colonel General counted among his decorations the Military Merit Cross 1st Class with War Decoration and the Grand Cross of the Order of Leopold with War Decoration. He was the Oberstinhaber of the 53rd Infantry Regiment, a Privy Councillor, and a Honorary Doctor of Philosophy at the University of Innsbruck. Generaloberst Viktor Graf Dankl von Kraśnik died at Innsbruck on the 8th January 1941.

In the photograph above, Viktor Dankl still holds the rank of General der Kavallerie. He wears the Marianerkreuz of the German Order at his throat and the Star of the Austrian Society of the Red Cross with the War decoration on his left breast. He wears a "Kleine Dekoration" of the Grand Cross of the Order of Leopold on the triangular ribbon and the breast badge of his 1st Class Military Merit Cross with War Decoration on his left breast pocket flap. He is also wearing both the 1st and 2nd Class German Iron Crosses.