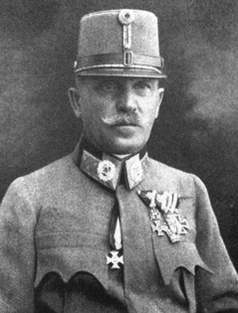 Wenzel Wurm was born on the 27th of February 1859 in Karolinenthal near Prague as the son of an Oberleutnant. After the Oberrealschule he entered the Genieabteilung of the Technical Military Academy in Vienna which he finished with "Vorz■glichem Erfolg" or excellent success being commissioned as a Leutnant in the 1st Genieregiment on the 24th of April 1879. After attending the Kriegsschule in Vienna from 1883 to 1885 he was transferred to the general staff as an Oberleutnant. In this function he was first employed with the 58th infantry brigade and then with the 24th infantry brigade having being  promoted to Hauptmann im Generalstab in the meantime. On the1st of May 1886 Wenzel Wurm married Irene Mezner from Prague. They had two daughters but one of them died as an infant. Following Irene Wurm's death (1895) the young widower remarried in May 1899 Maria Natieska also from Prague who also bore him a daughter.

Wenzel Wurm was promoted to Major on the 1st of November 1894 and after a short period of troop duty with infantry regiment number 75 he became the chief of the general staff of the 14th infantry division at Pressburg (Pozsony). In March 1895 he was transferred to the 5th department of the Kriegsministerium where he remained for two years. On the 1st of May 1897 he was promoted to Oberstleutnant and returned to the troops, now with infantry regiment number 76 where he was honored with the award of the Militðr-Verdienstkreuz (military merit cross) in December 1898. In April 1900 he returned to Pressburg in the post of the chief of the general staff of the 5th corps followed by his promotion to Oberst on the 1st of November of the same year. For his outstanding services in this position he was awarded the Orden der Eisernen Krone 3.Klasse (Order of the Iron Crown 3rd class) on the 24th of March 1904.

Together with his promotion to Generalmajor (1st of November 1906) he assumed command of the 37th infantry brigade at Pilsen. In February 1910 he became the commander of the 19th infantry division also garrisoned at Pilsen which was followed by his promotion to Feldmarschall-Leutnant on the 1st of November. He remained in this position until February 1914 when he became commander of the 16th corps at Ragusa having in the meantime been honored by the award of the knights' cross of the order of Leopold on the 24th of September 1912.  When the war began Wenzel Wurm was promoted to Feldzeugmeister (1st of August 1914) and received the command of the 16th corps, a part of the 6th Armee which would attack Serbia. 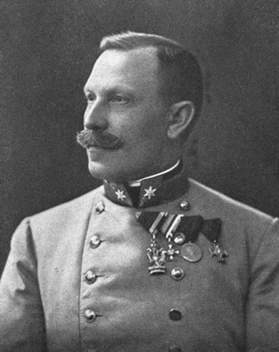 During the first offensive in August 1914 the 16th corps marched through the Sandschak to Uvac and after the general retreat, again in September crossed the Drina and captured the strategic point at Jagodna. Even in the face of  hard Serbian counterattacks FZM Wurm was able to hold this important emplacement. He was awarded the Orden der Eisernen Krone 1.Klasse mit Kriegsdekoration (grand cross of the order of the Iron Crown with war decoration) for this on the 15th of October 1914 - when the swords were introduced later he received them retroactively, of course. At the beginning of November 1914 new efforts took place to defeat the Serbian army and the Drina was crossed over a wide front. The 16th corps left Jagodna, captured Valjevo and reached the Rudni mountains in permanent fighting. The bad weather and the lack of useable roads for transport caused a seriously low supply position for the Austro-Hungarian units and the food situation was especially critical for the exhausted troops. All corps commanders asked the commanding General FZM Potiorek for a pause to rest their worn-out troops. Only Wenzel Wurm knowing that his commander desired and needed a quick victory reported the opposite opinion. He immediately received the order for further attacks and these he executed seemingly without concern for his troops but after the Serbian army received fresh reinforcements at the front, the whole Austrian offensive broke down and lead to a bloody and hasty retreat. The Austro-Hungarian public was shocked; they had previously heard only optimistic news from the Balkan front and FZM Wurm requested a court of inquiry which should examine his personal actions.  FZM Potiorek did not agree, he (correctly) took the full responsibility on his own shoulders and resigned from his command. This stopped FZM Wurm's planned retirement but from this time on he had the reputation of a ruthless commander without consideration for his troops.

When Italy declared war on the 23rd of May 1915 FZM Wurm with his 16th corps in Syrmia at this time received the direct order to: "stop the Italians with all methods as early as possible and to slow down their advance by causing them as many causalities as possible". FZM Wurm placed his troops west of G—rz and along the Isonzo at his own decision and not, according to his orders, on the more rearward highlands of the Carso. This was the basis of the success during the following four defensive battles and lead later to the award of the knights' cross of the Militðr Maria Theresien Orden on the 14th of August 1917 followed by his ennobling to "Freiherr von" two days later. 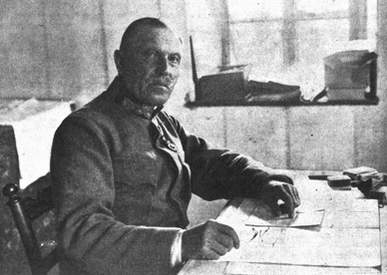 In June 1918 the Austro-Hungarian army commenced the last large scale offensive against Italy. It was planned that the Isonzo Armee and the 6th Armee should cross the Piave while the Heeresgruppe FM Conrad should attack as a second wing through the mountains but this separation of the force was more than the worn-out troops could stand. On the 15th of June 1918 they crossed the Piave and four corps were able to maintain emplacements there, especially the 23rd corps with surprise success. Unfortunately Heeresgruppe FM Conrad failed in its mission and so the Italian command were able to deploy their troops in strength on the Piave. The high-water level of the Piave had destroyed all the bridges and therefore the support transports were unable to reach GO Wurm's troops. This together with the superior Italian forces made the situation desperate. Not even a "ruthless" commander such as GO Wurm could do wonders and so he was compelled to order the retirement back to the eastern bank of the Piave on the 20th of June 1918. This was the beginning of the end. When the enemy-forces began their offensives on the 24th of October 1918, many men and units had deserted in the meanwhile and the only possibility was a general retirement - only the Isonzoarmee did this in order and without any panic!

After the war Generaloberst Wenzel Wurm was retired to Vienna on the 1st of January 1919. During the war he only received the following foreign decorations: the Prussian Iron Cross 2nd and 1st class and the Ottoman war-medal, the so-called Iron Half crescent, and the Osmanje order 1st class with swords - all of them during the year 1918. It seems strange that such an important and useful Commander received so few and relatively low decorations from the allied countries. He died in Vienna on the21st of March 1921.