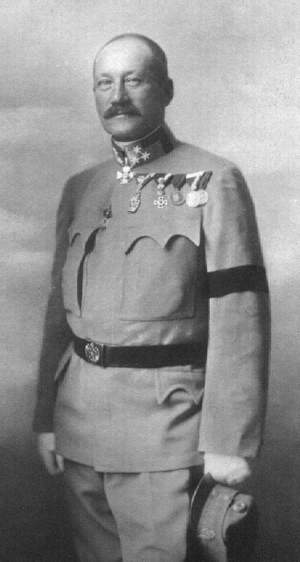 Alois SchŲnburg-Hartenstein was born on the 21st of November 1858 in Karlsruhe (Baden) as the son of the imperial Austrian envoy Alexander FŁrst SchŲnburg-Hartenstein and his wife Caroline, born a Princess of Liechtenstein. The family which originally hailed from Saxony also had estates in Austria-Hungary and counted among the most distinguished families within the monarchy. As the eldest son, Alois enjoyed a good but strict education. After attending the Jesuit college in Kalksburg and the 6th class at the Schottengymnasium in Vienna he entered the cadet school in Dresden. After completion of the training he was returned to his father in Vienna where he joined dragoon regiment number 14 on the 29th of April 1877. After successful completion of the course at the cadet school he was commissioned in this regiment as a Leutnant on the 1st of May 1878. Although his regiment was mobilized for the campaign of 1878 it saw no action. Following a short period of garrison life at GŁns and Rechnitz he attended the course at the military riding instructors' institute in Vienna from 1882/83 and already as an Oberleutnant from 1884 to 1886 the war school also in Vienna. In 1887 he married Johanna Gršfin Colloredo-Mansfeld with whom he had two sons and four daughters.

Promoted to Hauptmann 1.Klasse in the general staff on the 1st of May 1889 and after general staff service with the 5th corps at PreŖburg he was transferred to the intelligence department in which he was involved with intelligence matters regarding Germany. Following a short period of service with the 2nd dragoon regiment in which he had in the meantime been promoted to Major, he was assigned the post of military plenipotentiary with the Austrian embassy in Berlin. In the same year he was appointed a personal adjutant to the Kaiser.

Following the death of his father in 1896, SchŲnburg's military career was interrupted. As an Oberstleutnant he was placed on reserve status on the 1st of November 1897 as he had then to manage the family seat of SchloŖ Hartenstein in Saxony. In addition to the title of a FŁrst, he also inherited an hereditary seat in the house of lords of the Austrian parliament where he especially committed himself as president of the so-called centre party against the general franchise and for the promotion of understanding between nations. Already by 1898 he was selected to become the vice-president of the house of lords, a position he would hold until 1918. In addition to these political offices he also undertook at the request of the Kaiser the presidency of the red cross society in which he above all was involved with the provision of aid materiel during the Balkan wars. This important position was correspondingly acknowledged in the year 1903 with the award of the order of the golden fleece.

By the outbreak of the war he had attained the rank of Generalmajor der Reserve. He was immediately offered a troop command, that of the 11th march brigade which he assumed on the 1st of August 1914. For the most part this formation consisted of Galician-Ruthenian personnel which went to the assistance of the 3rd corps which was engaged against superior Russian forces in hard fighting in eastern Galicia. The battle however developed unfavourably and SchŲnburg's brigade suffered severe losses. On the 8th of September 1914 he received the command of the 88th LandesschŁtzenbrigade which was composed in the main from alpine troops. Following the retreat over the San, to Przemysl and further to Gorlice, the Austrian army again went on the offensive. The 3rd army to which his brigade was subordinated managed to liberate Przemysl for only a short period before it again had to retreat. In December he took part with his troops in the successful battle of Limanowa-Lapanůw. Here the 88th LandesschŁtzenbrigade was deployed where ever the situation was critical. FŁrst SchŲnburg-Hartenstein, since October a Feldmarschall-Leutnant was always to be found in the front lines. Wounded on Christmas Eve 1914 he allowed his soldiers to remove an enemy bullet from his shoulder.

On the 26th of December 1914 he was appointed to the command of the 6th infantry division. He spent the winter in the Carpathians with Armeegruppe Pflanzer-Baltin and advanced in the offensive of February 1915 to Nodworna. On the 31st of April 1915 he received the command of Korps Ljubicic which was then renamed Gruppe SchŲnburg. With his numerically weak corps he took part in the breakthrough at Gorlice and the advance to the Dniester. From June he again commanded the 6th infantry division and was transferred with it in October to the Italian theatre where SchŲnburg with his troops covered the Doberdo Plateau and particularly distinguished themselves in the defence of Monte San Michele.

At the beginning of July 1916 he succeeded the heir to the throne Archduke Karl in command of the 20th corps. A month later he was promoted to the rank of General der Kavallerie. With his "EdelweiŖkorps" the general proved himself in the positional warfare in the South Tyrol. After a hard year of mountain fighting the command of the 4th corps followed on the 22nd of August 1917 with which he took part in the 11th battle of the Isonzo. The combat zone of the 4th corps stretched from east of the Isonzo on the Bainsizza Plateau up to Monte San Gabriele. Up to the middle of October 1917 the Italians had attempted to capture Monte San Gabriele with great strength but were always thrown back with heavy losses. In order to encourage the exhausted and discouraged troops to hold out, the general was always personally in the front lines which resulted in the award of the golden bravery medal for officers in July 1919. For his defence against the Italians and the holding of Monte San Gabriele, the most important pillar of the Isonzo's defences he was awarded the military order of Maria Theresia after the war.

In the aftermath of the breakthrough at Flitsch and Tolmein SchŲnburg's corps advanced to the Piave where they manned a new permanent position. The poor situation of the monarchy and the first appearances of political decay allowed Kaiser Karl to play with the idea of installing a strong military government. In the middle of February 1918 SchŲnburg was called to Vienna to hear from the Kaiser that he had been designated as prime minister with the task to arrange a powerful superior military command in the rear area to maintain order. However, through different influences, including the minister of war and the chief of the general staff the Kaiser abandoned this plan again. Also the creation of a headquarters overseeing the mobile troops in the rear areas remained stuck at its inception. Disappointed, he received permission to return to his troops at the front. 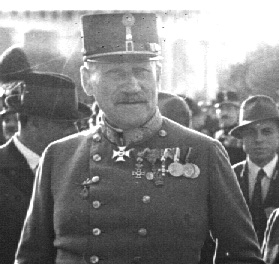 During the unsuccessful Piave offensive in June 1918 FŁrst SchŲnburg again led his corps from the front and crossing the river he was wounded in the stomach by a shell splinter. Among his contemporaries in the ranks of Feldmarschall and Generaloberst he was the only one to possess the wound medal and additionally with two stripes! After his stay at the hospital and a short period of nursing at home he returned to the front on the 16th of July as commander of the 6th army. His area of responsibility stretched from Feltre to Papadopoli Island. As the collapse approached and the Italian offensive struck the already very weak Austro-Hungarian troops on the 24th of October 1918, the Piave army could only offer weak resistance. On the 27th of October the Italians achieved a breakthrough on both sides of Montello and at Papadopoli Island. 6th army's planned counter-offensive for the 29th could no longer be executed as the mass of the units would no longer obey orders and the retreat had to begin.

On the 1st of November 1918 SchŲnburg was summoned from his army command to Vienna to be placed at the Kaiser's disposal. The plan of Boroevic and SchŲnburg, in which troops would come to the aid of the Kaiser was no longer realisable. On the 5th of November he traveled by car to Villach to 6th army headquarters where he found however only a few officers and practically no troops. Having been promoted to Generaloberst on the 11th of November, the last such promotion to this rank, he was released from service on the 16th and traveled again to his family at Achensee. 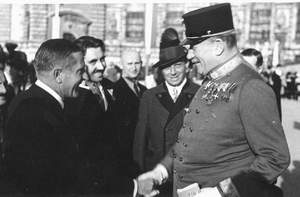 In the days of the revolution his house in Vienna was seized, while the Czechs expropriated his possessions in Moravia. However SchŲnburg remained as an important  political figure in the following years on account of his posts as president of the Austrian state comrades and war veterans association and the union of catholic nobles. After various visits in1928 and 1930 with Kaiserin Zita and the heir apparent Otto in Spain, the already 75 year old strict catholic and monarchist was appointed state secretary for defence on the occasion of a cabinet reshuffle under Chancellor Dollfuss on the 21st September 1933 and became the minister of defence on the12th of March 1934. Already three months later Generaloberst SchŲnburg retired from the government as his program for an apolitical army and the abolition of the Habsburg amendment could not be executed.

In the last years of his life FŁrst SchŲnburg withdrew ever more frequently to his seat in Hartenstein where he finally died on the 20th of September 1944.

Back to the Colonel Generals