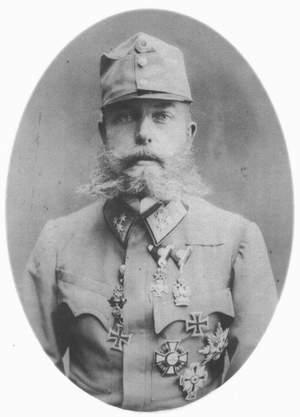 Erzherzog Joseph Ferdinand was born on the 24th of May 1872. He was the son of Ferdinand IV, the last Grand Duke of Tuscany and his second wife - Alice of Bourbon-Parma. As the fourth of a total of ten children he grew up in exile in Salzburg as a member of the house of Habsburg-Toskana. Following numerous scandals, the eldest son, Archduke Leopold Ferdinand withdrew from the house of Habsburg and adopted the name Leopold Wölfling. Joseph Ferdinand as the now eldest son of the Toskana family branch did not take up the title as a Grand Duke of Tuscany, a title his father still held.

Erzherzog Joseph Ferdinand attended the military Oberrealchule at Mährisch-Weißenkirchen and after that the Theresian military academy at Wiener-Neustadt from which he was commissioned as a Leutnant in the Tyrolean Jäger regiment on the 18th of August 1892. Following various assignments with infantry regiments 93, 17, 59 and the 4th regiment of Tyrolean Jägers he was attached to infantry regiment number 27 as an Oberstleutnant in 1903. From 1895 until 1897 he had attended the Kriegsschule in Vienna and from 1905 until 1908 he commanded infantry regiment 93 as an Oberst followed by command of the 5th infantry brigade.

His service was more and more interrupted with leave with which the enthusiastic hunter availed himself with hunting trips abroad. A further interest of the Prince was air travel. He had already concerned himself with balloon travel and in 1909 flew from his home in Linz with his own balloon to Dieppe in France in 16 hours.

In January 1911 Erzherzog Joseph Ferdinand received command of the 3rd infantry division in Linz followed shortly afterwards by his promotion to Feldmarschall-Leutnant on the 1st of May 1911. At the outbreak of war the Archduke received his first corps command, that of the 14th Corps having been promoted in the meantime to General der Infanterie. He was simultaneously the defence commander of the Tyrol and Vorarlberg and the commanding general at Innsbruck. With his 14th corps, with which many elite regiments were to be found, he fought on the eastern front in the Autumn of 1914 as a group commander. In support of General Auffenberg's army, he attacked successfully in the bend of the river Bug and fought at Komarów, Zamosc and Rava Ruska. Following the relief of General Auffenberg he was at first provisionally appointed to command the 4th army on the 10th of September 1914 followed by permanent command on the 9th of November 1915. 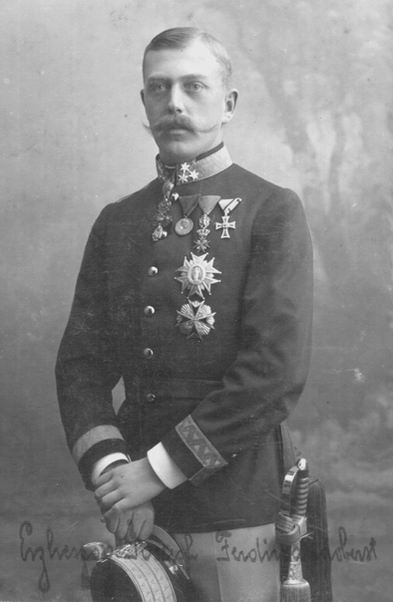 With the 4th army he took part in the bloody winter campaign in the Carpathian mountains and the successful spring offensive of 1915 at Gorlice-Tarnów. Following the breakthrough of the Russian front at Gorlice and the battle of Krasnik he entered Lublin as it's conqueror. Following the fall of the fortress at Brest-Litovsk on the 26th of August 1915, the high command attempted a continuation of the offensive which however failed and compelled a retreat to behind the river Styr. On this line the front was finally stabilised and in more than six months well constructed, even comfortable positions were constructed. Above all the sanitary conditions were improved through the Archduke's influence. With his promotion on the 26th of February 1916 he had finally reached the rank of Generaloberst.

Up to this point the Archduke's career had been successful. He was now to be judged as one of those mainly responsible for the so-called catastrophe at Luck in June 1916. The Russians had planned for some time a great attack in July 1916 against the central powers. At the insistence of the French and Italian politicians this was however brought forward. The main reason was the German offensive at Verdun and the Austro-Hungarian offensive in the Trentino in Italy. The Russian offensive was to provide relief for these two fronts. The central powers could not naturally fail to anticipate the Russian offensive preparations but put their trust in the well constructed positions and the battle experience of the available troops. The four armies of General Brusilov's South Western front attacked on a wide front. General Kaledin's 8th army had the mission to lead the attack against the Austro-Hungarian 4th army. Through individual initiative and without particular reinforcement Brusilov's troops attacked on the 4th of June 1916. Already in the first days of the offensive the Russians succeeded in a deep penetration of the Austro-Hungarian positions at Olyka. Prolonged Russian artillery fire had to a large extent destroyed the trenches of the Austro-Hungarian infantry and made a surprise Russian penetration into the defensive system possible. Extremely severe casualties and a high number of losses through capture forced the 4th army to retreat to a defensive position further to the west. Already by the 10th of June the Russians, ever pressing forward, crossed the Styr. They had penetrated the Austro-Hungarian positions to a width of 85 km and to a depth of 48 km. In increasing measure the commanders were becoming ever more nervous and the troops showing signs of discouragement. Some regiments of Slav nationality especially were only putting up limited resistance against the Russians. In eventful fighting, however the German and Austro-Hungarian troops managed to consolidate the strongly shaken front around the end of July 1916 so that the danger of a Russian breakthrough of war winning decisiveness was eliminated.

The army group commander Generaloberst Linsingen blamed the command of the 4th army in numerous dispatches to the AOK at Teschen for the breakdown in the leadership of the troops and with this judgment the immediate relief of the Archduke of his command of 4th army was obtained from the Kaiser by the 7th of  June. Further investigations were carried out to clarify the precise question of blame. In a report by the chief of staff of the 4th army, Josef Ferdinand was indeed relieved of much of the blame. However his name remained associated with much of the leadership and a considerable part of the public with the defeat at Luck. Kaiser Franz would not protect the Archduke just because he was a member of the royal  dynasty in deference to public opinion.

Following the accession to the throne of Kaiser Karl in November 1916, the new Kaiser wished to reemploy Erzherzog Joseph Ferdinand in the post of General-Inspektor der Luftfahrtruppen (general inspector of the air force). To this appointment the Archduke would bring his long experience through his association with ballooning to the post. The AOK immediately objected to the appointment but despite their reservations the Archduke was finally appointed to his new post on the 8th of July 1917 and in which he remained until the 3rd of September 1918.

Following the collapse of the monarchy the Archduke remained in Austria and on account of that had to publicly renounce his membership of the house of Habsburg.  He married his first wife, the commoner Rosa Jockl in 1921 and lived at Mondsee. After his separation to his first wife he married again in 1928 a wife not in keeping with his social status - Gertrude Tomanke Edle von Bayerfels. After the Anschluß of March 1938 Joseph Ferdinand was taken into protective custody by organs of the NSDAP on the 10th and remained under house arrest until the 25th of March under SA guard. Finally he was taken to the concentration camp at Dachau and placed in solitary confinement and only released,  it is alleged at the intervention of Hermann Göring with whom the family had been friendly, on the 4th of April. Joseph Ferdinand was therefore the only member of the house of Habsburg who had been held in a concentration camp. He died on the 25th of August 1942 in Vienna.