The Last March Past of TJR1 before his Majesty the Kaiser 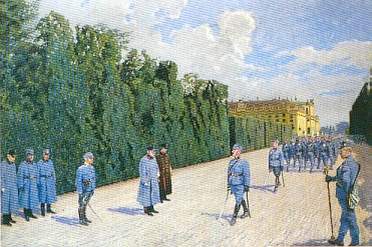 In mid July 1915 the 1st Tyrolean Imperial Rifle Regiment was withdrawn from the Russian front to be redeployed on the new Southwestern front against Italy. During the regiment's journey South it was planned that the regiment would be reviewed by Kaiser Franz Joseph at Schönbrunn in Vienna. This memorable occasion was described by the regimental adjutant of TJR1, Hauptmann Karl von Raschin in his book "Die Einser Kaiserjäger im Feldzug gegen Russland 1914-1915" from which the following is drawn.

On the 15th of July 1915 the regiment was entrained at the border town of Rozwadow in Galicia in three march echelons. The strength of TJR1 at this time was reported as 50 officers (of which 7 were regulars), 1408 NCOs and Jäger, 268 horses and 44 wagons. At 19:30 hours the first train departed Rozwadow followed at two hour intervals by the other two echelons. Breakfast was distributed at Jaroslau the following morning and after mounting the transports again, the journey continued to the West via Debica, Tarnów passing Craców that night. On the 17th the journey continued with only short pauses at Oderberg and Lundenburg towards Vienna which the men of TJR1 wished to reach as soon as possible in order that the Kaiser could see his Jäger. The regiment reached Vienna during the evening of the 17th. Oberst von Soos, the regimental commander had gone on ahead in a fast train in order to receive instructions: They would be on parade at 08:00 hours in the park at Schönbrunn the following morning so the men of the regiment were busy throughout the whole night effecting repairs to torn uniforms, sewing on lost badges of rank and generally cleaning themselves up.

The morning of the 18th of July 1915 found Vienna under pouring rain. Nevertheless the parade was to continue as planned. The men of TJR1 protected themselves from the weather by taking cover in the regiment's transport wagons until shortly before the march to Schönbrunn. At three minutes to 8 the regiment was in the park ready for the parade. Punctually at 08:00 hours his Majesty Kaiser Franz Joseph accompanied by his heir, Archduke Karl stepped out of the Schönbrunn palace and the rain suddenly stopped! The regimental band played the Volkshymne and the buglers sounded the general march. All eyes turned towards the aged ruler. The majority of the regiment had never seen his Majesty in the flesh. With the sprightly step of a man of much younger years the Kaiser approached the regiment. The regimental commander, Oberst von Soos marched up to his Majesty and delivered his report whereupon the Kaiser reviewed the regiment's front. Every man of the regiment could now look his emperor in the eyes. He spoke to many of them. The Kaiser did not wish to just see his brave riflemen but also to speak to them. After his review his Majesty addressed the regiment and expressed his regrets that only two battalions were on parade. The officers and officer cadets were then assembled so that the Kaiser could speak to them individually, enquire after fallen comrades and ask questions regarding their decorations and also to shake each officers' hand. His Majesty then had all the holders of the Golden bravery medal brought to him. The regiment had at this time 22 holders of this prestigious award although on this occasion only six were present. The remainder were either buried in Russia or in the field hospitals recovering from wounds.

At this stage an embarrassing problem arose. Instead of the six Golden bravery medal holders being present as had been previously arranged with the cabinet chancellery only five were present. That very morning one of the six, a Zugsfüher had been admitted to hospital. Hauptmann von Raschin himself a holder of this medal pinned his own decoration on the nearest Zugsführer, explained what action he was supposed to have received it for and propelled him forward with the other six! The Kaiser listened with great interest as the six described the actions for which they had been decorated occasionally interrupting with a question of his own. The Kaiser individually thanked the six and took leave of them with an handshake and the parting "God be with you".

The assembled throng were surprised at his Majesty's knowledge of the regiments actions and achievements. He however wanted to hear from the mouths' of the fighters themselves and wanted to thank the officers for their conscientious leadership of his beloved Tyrolean riflemen. The junior officers and cadets were then dismissed and the staff officers and captains remained: Oberst von Soos, Major von Rotter (attached from the 6th Uhlans) and the captains Högn, von Raschin, Graf Romer and von Istler. Almost tearfully his Majesty said "And these are all the captains in my Tyrolean Kaiserjäger Regiment"? The Kaiser asked after various officers who he personally knew and the regiment commander answered time and again "killed at....", or "wounded at....". His Majesty took his leave with the words " Lead my brave Tyroleans prudently! From victory to victory as you are accustomed to! Your colonel in chief accompanies you in spirit."

The Kaiser then went to the centre of the regiment so that every man could clearly hear his words and again spoke to them:

"My beloved Tyrolean Jäger! We follow your every heroic action with an especial interest. Your Kaiser and colonel in chief marvels over your bravery, contempt of death and your heroism. With deep sorrow we hear of your great sacrifices and losses. Our prayers to God the almighty belong to these brave men. You will now fight in the Italian theatre and it is God's will that this calamitous struggle between nations will soon be ended through your outstanding contribution and we will be able to turn to the work of peace in order to heal the deep wounds of war. You have your Kaiser's thanks, you, my brave Tyrolean riflemen, and greetings from us to the other three regiments. God protect you!" 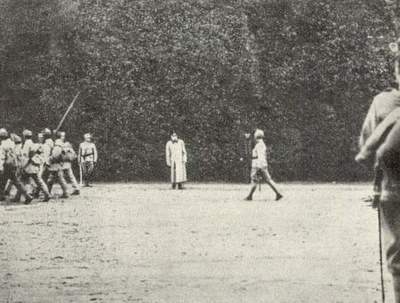 From the mouths of the entire regiment roared "Hoch unser Kaiser Franz Josef" and many threw their caps into the air. The regiment then passed in review in front of his Majesty who benevolently waved at his Tyroleans. The regimental commander and regimental adjutant remained with the Kaiser during the march past. The Kaiser communicated his praise to Oberst von Soos for the outstanding discipline shown by the regiment despite the strain of nearly a year of war. With the words "Colonel, greet for me my Tyrolean riflemen of all four regiments" he took his leave at 09:00 hours.

TJR1 was the only regiment of the entire Austro-Hungarian armed forces accorded the honour during the war to be greeted personally by the commander in chief. The regiment was entrained for the Isonzo front shortly after this parade. His Majesty was never again to see his beloved Tyroleans, himself dying the following year. The coloured illustration on this page shows Hauptmann Julius Högn's battalion passing in review before the Kaiser. Flanking his Majesty are Oberst von Soos and Archduke Karl in a brown cavalry greatcoat.

Back to Main Page