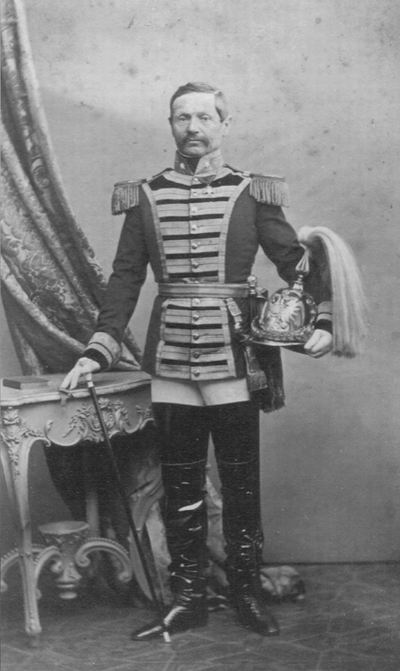 Johann Wittek was born at Jung-Woschitz (Vozice Mlada - Czech Republic) on the 19th of October 1801. His family was a fine example of the possibilities of a social-career during the monarchy. His father Adalbert ran an old-established butcher's shop at Jung-Woschitz. Although not wealthy he was comfortably well off and well known in the area. At the end of his life he became an honorary citizen (Ehrenbürger) of his village. It was therefore not a problem to send his highly intelligent son Johann for some years to a university to study theology and philosophy before he should take over the family business. However Johann Wittek was not interested in the family business;  he wanted to become an officer in the Kaiser's Army! On the one hand it was common in those times to pay a Regimental- Proprietor for an officer's post and Johann's father could probably raise that amount but on the other hand such an agreement was subject to the approval of the officer corps of the regiment involved and it was not likely that they would have happily accepted the son of a butcher into their ranks.

As Johann Wittek so desired a military career and was especially talented in mathematics, he volunteered as a common soldier in the Artillery in January 1821. As the Artillery units had at the time fairly little prestige there were no regimental proprietors and the whole branch was under the control and payment of the Royal High command. It was therefore possible for highly talented men who were able to successfully pass several difficult examinations to embark on the career of a Feuerwerker. After the basic training which took 2 years the man could then take the higher course of five years duration and on completion be promoted to Feuerwerker with the possibility of further advancement to Oberfeuerwerker and eventual commissioned rank. Later the Feuerwerker was simply given the title of a Feldwebel of the Artillery, but at this time the Feuerwerker and Oberfeuerwerker, especially those of the Bombadier Corps, were highly qualified technical men engaged in the construction, development and production of all types of guns as well as ammunition and explosives. The seven years in which one had to successfully pass the practical training during the summer and theoretical lessons during the winter months was filled with difficult examinations in mathematics, physics, chemistry and ballistics. Indeed one of the major reasons for the eventual disbandment of the Bombardier Corps was the difficulty in finding students of the required calibre willing to complete this long and hard course of instruction. This system did however produce many excellent technical designers and officers during its existence - but for men like Johann Wittek it was the only way to win the Golden Portepee (officers' sword-knot)!

After 15 years of service with the Artillery and the Bombadier Corps Oberfeuerwerker Johann Wittek received his promotion to Unterleutnant in the Viennese Artillery Regiment number 2 in November 1836. In June 1841 he was transferred to Infantry Regiment number 58 at Stanislau with the additional promotion to Oberleutnant. On the 1st of October 1842 he married Elise (1824-1891) the daughter of the Stifs-Justiziär Johann Stibral of the Stift Klosterneuburg near Vienna. They had 4 children: Heinrich, born 1844, the famous railway expert and minister, Sophie, born 1848, Johanna born 1860 and finally Maria Annunziata born 1867 who remained unmarried like her brother and became a well known author during their days. In January 1845 Johann Wittek received his promotion to Capitän-Lieutenant (which was later renamed into Hauptmann 2nd class) in Infantry Regiment number 24 which was the second regiment garrisoned at Stanislau. During all this period his family lived at Vienna - all their children were born there - so it was understandable that he attempted to get one of the desired posts in the capital city.

It may have been the case that his intelligence, education and wide reading had made him an excellent candidate or possibly that his father-in-law had used his contacts to the Royal Household - in any case in the summer of 1846 Johann Wittek was temporarily attached to the court at Vienna as an educator of the royal princes. In September 1847 he was transferred to the Royal Household, with the additional promotion to Hauptmann with the engagement of looking after the sons of Archduke Franz Carl - the later Kaiser Franz Joseph (16 years old), the later Kaiser of Mexico Maximilian (14 years old), Archduke Carl Ludwig (13 years old) and Archduke Ludwig (4 years old). Especially for the younger Archdukes he became an important figure over the following years. On the 15th of September 1853 Johann Wittek received his promotion to Major in Infantry Regiment number 24 remaining at his post as an educator of the remaining sons of Archduke Franz Carl. On the 29th of September 1858 he was honored by being risen to the nobility with the predicate "Edler von".

After more than 14 years of court duty even the last Prince had grown up and the end of his engagement appeared. But having spent so long away from regimental duty it was probably deemed more practicable not to return him to front line service. On the 12th of May 1860 Major Johann Edler von Wittek was transferred to the Trabanten Leibgarde with the interim rank of Garde-Unterlieutenant which was the equivalent of an Oberstleutnant. After his promotion to Oberstleutnant on the 26th of February 1863 his guard rank became definitive. Emperor of Mexico Maximilian remembered his old educator and honored him with the award of the officer's cross of the Mexican Order of Our beloved Madonna of Guadalupe on the 2nd of December 1864. On the 20th of November 1866 Johann Edler von Wittek received the honorary promotion to Garde-Oberlieutenant followed by the honorary promotion to Oberst (mit Titel und Charakter) on the 9th of June 1869 both  of which became substantive with effect of the 8th of April 1870.

On the occasion of his 50th year on active duty he was honored by the award of the 3rd class of the Order of the Iron Crown on the 22nd of December 1870. This in turn enabled a further tax free promotion within nobility with the predicate "Ritter von" on the 24th July 1871. At the beginning of his 55th year on active duty Oberst and Garde-Oberlieutenant Johann Ritter von Wittek died in the age of 75 on the 27th of January 1876 at Vienna.