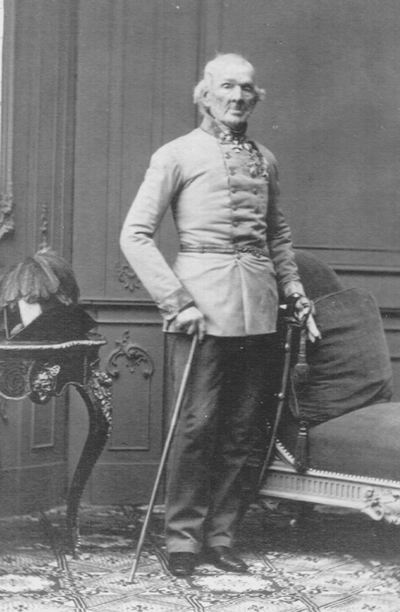 Ludwig George Thedel Graf von Wallmoden-Gimborn was born on the 6th of February 1769 in Hanover. After completing his education he entered Hanoverian service as a Lieutenant in the Hanoverian Leibgarde-Regiment and transferred into the Prussian army in 1790 in which he fought during the revolutionary wars against France and was awarded the Prussian Order Pour le Mérite in 1794 for his conduct at the battle of Kaiserslautern on the 20th of September whilst serving a Rittmeister in Husarenregiment Wolffradt number 6 in during which action he was wounded with a bayonet thrust to the chest. He remained in Prussian service for five years before yet again transferring; this time into Austrian service as a Rittmeister 2. Classe in October 1795 into the Vécsey Hussar Regiment. Promoted to Rittmeister 1. Classe on the 1st of January 1797 he was simultaneously transferred to the Karaczay Chevaulegers Regiment with a further promotion to Major in the general staff on the 16th of April 1797. He was assigned to Dragoon Regiment number 2 on the 7th of June 1798 and promoted to Oberst-Lieutenant in the 1st Uhlan Regiment on the 3rd of August of the same year. On the 16th of August 1801 he assumed command of his regiment.

He remained in command of the 1st Uhlans until promoted to Generalmajor on the 1st of April 1807. He was dispatched to London at the beginning of the war in 1809 to negotiate subsidies which he rapidly accomplished and returned to Austria in time to participate in the battle of Wagram on the 5th and 6th of July 1809 as a brigade commander in Feldmarschall-Lieutenant Graf Klenau's 6th Army Corps. He distinguished himself on the second day of the battle and in the ensuing withdrawal to Moravia at the encounter at Hollabrunn on the 9th of July in which the 6th Army Corps had provided the rear guard. The commander in Chief of the Austrian forces, Generalissimus Erzherzog Karl awarded him the Knight's Cross of the Order of Maria Theresia in the name of the Emperor promulgated by the Army Order of the 13th July 1809. Promoted to Feldmarschall-Lieutenant on the 21st August 1809, he transferred with permission of the Emperor into English service at the end of 1912 and then into Russian service in order to assume overall command of the light troops commanded by Generals Dörenberg, Tettenborn and Czernitchew in Northern Germany with orders to cover the right flank of the main army in its crossing of the River Elbe. Following the battle of Lützen on the 2nd of May 1813, Wallmoden took up quarters in Lüneburg and Mecklenburg. He used this period to reorganize his corps which had a strength of 28, 031 men and sixty cannon. This mixed corps now consisted of Prussia, Russian, Swedish, Hanoverian and various north German contingents. As part of the Army of the North, Wallmoden was engaged throughout August  1813 in covering the area of Hamburg commanded by Marshal Davout. Following the Leipzig campaign, Wallmoden continued to lead his corps until the fall of Paris when the corps was disbanded and the general returned to Austrian service on the 24th of May 1815.

In August 1816 he assumed command of the Imperial troops in Naples, the "Truppenkorps"  to restore order during a period of unrest there and on the 30th of August 1819 was appointed as the Colonel-Proprietor of the the 6th Cuirassier Regiment. When in July 1820  further unrest broke out in Naples, the Austrians dispatched an army of some sixty thousand troops and Wallmoden commanded a division which formed the left flank of the Austrian forces in the corps of General der Cavallerie Graf Frimont. The unrest was rapidly put down and Wallmoden reentered Naples on the 24th of March 1821 and assumed the supreme command in Naples. He remained in command in Naples until March 1827 when the Austrian forces withdrew and took up an appointment in Lombardy-Venetia as the military commander in Milan. He simultaneously commanded the 1st Army Corps from August 1830 until March 1848. He was appointed a Privy Councillor on the 20th of January 1831 and was promoted to General der Cavallerie on the 18th of September 1838. He remained in his post at Milan until the 1st March 1848 when he was appointed as the deputy of Feldmarschall Graf Radetzky until he finally retired on the 19th of October 1848. On his retirement, Emperor Franz Joseph awarded him the Grand Cross of the Order of Leopold. Do you use Google ADS for your eCommerce store? You need to know How To Create Google ECommerce Shopping Ads that will increase you revenue!

Following his retirement the General lived in Vienna and died at the age of 94 on the 20th of March 1862.