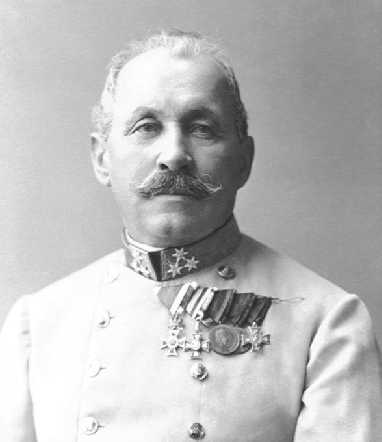 Marian Varešanin was born on the 1st of February 1847 at Gunja (Croatia) as the son of an officer from the Slavonian Grenzinfanterie Regiment number 7. After successfully graduating from the cadet institute at Fiume and the military academy at Wiener Neustadt he was commissioned as a Leutnant in infantry regiment number 78 on the 19th of August 1866. With this regiment he saw action in the northern theatre of operations as part of the 3rd army. Between 1869 and 1871 he attended the Kriegsschule at Vienna with "very good success". On the 1st of January 1872 he was permanently attached to the general staff corps and transferred to the headquarter of the 2nd infantry division at Vienna shortly followed by his promotion to Oberleutnant on the 1st of May of the same year. On the 1st of May 1873 he received his promotion to Hauptmann 2nd class in his regiment but when the general staff corps was reorganized in 1876 he was transferred to this corps as a Hauptmann 1st class. During the following years he was assigned to the headquarters of the 2nd brigade of the 11th infantry division at Lemberg, the 36th infantry division at Agram, the 18th infantry division at Zara and finally the military mapping bureau of the general staff corps at Vienna. On the occasion of the Kaiser's journey to Dalmatia in 1875 Hauptmann Varešanin was attached to the Fürst of Montenegro and was honored by the award of the Montenegrin Order of Danilo 4th class. Subsequently he was attached to the general staff of the Armee-General-Commando at Zara where he received the Military Merit Cross on the 3rd of December 1878 for his outstanding performance during the mobilization on the occasion of the occupation of Bosnia and the Herzegovina. In 1879 he was attached to the delegation of Serbian officers who observed the large manouvres at Bruck an der Leitha which was honored by the award of the officer's cross of the Serbian Order of Takowo. On the 1st of May 1881 he was promoted to Major followed by his appointment as chief of the general staff of the 9th infantry division at Prague in October 1881. Between September 1882 and December 1883 this division was under the command of the heir to the throne Erzherzog Rudolf. When the Archduke was released from this post, Major Varešanin was attached to his royal household to continue the heir to the throne's instruction in military history and military geography. During this assignment he received the Prussian Order of the Red Eagle 3rd class on the 4th of December 1883 and his promotion to Oberstleutnant on the 1st of May 1885. In November 1885 Oberstleutnant Varešanin was transferred for a stint of line duty with infantry regiment number 75 at Prague.

His father the retired Hauptmann 1st class Raimund Varešanin was ennobled with the predicate "von Vareš" on the 21st of May 1880. As was common, this title could be passed on to a son who had  more than 20 years in public or military service. On the 1st of April 1887 Marian Varešanin von Vareš was appointed chief of the general staff at the headquarter of the military command at Zara. At this post he received his promotion to Oberst on the 1st of May 1888. On the 4th of December 1893 he assumed command of the 48th infantry brigade at Przemyśl followed by his promotion to Generalmajor on the 1st of May 1894. Between October 1896 and March 1897 he was in command of the 3rd infantry brigade. On the 2nd of April 1897 he took over command of the 18th infantry division at Mostar where he received his promotion to Feldmarschall-Leutnant on the 1st of November of the same years with seniority from the 8th of November 1897. In September 1900 he was attached to the headquarter of the 12th corps at Hermannstadt. His performance there was honored with the award of the knight's cross of the Order of Leopold on the 18th of October 1902. About a year later on the 10th of October 1903 he was transferred to the 15th corps at Sarajevo as deputy commanding general. On the 8th of April 1905 Feldmarschall-Leutnant Varešanin von Vareš was appointed as the military commandant of Zara followed by the honorary title of Geheimer Rat (Privy Councillor) on the 11th of August of the same year and his promotion to Feldzeugmeister on the 1st of November with seniority from the 31st of October 1905. For his outstanding performance at this politically important post he was honored with the title of Oberstinhaber of infantry regiment number 22 (15th August 1906) and the grand cross of the Order of the Iron Crown (2nd January 1908). In the course of the reorganization of the general ranks in autumn 1908 his title was changed to that of General der Infanterie.

On the 7th of March 1909 General der Infanterie Marian Varešanin von Vareš was appointed to command the 15th corps at Sarajevo, commanding general at Sarajevo and the head of government of Bosnia and the Herzegovina. On the 29th of July 1909 he additionally received the appointment as General-Truppen-Inspektor. To avoid a complete overload of work the command of the 15th corps was transferred to General Moritz Ritter von Auffenberg in October 1909 but General Varešanin von Vareš stayed as chief of the local government which was the reason why a young Serbian, the student Bogdan Zerajic, made an attempt in Serajevo to assassinate him on the 2nd of June 1910. The assailant fired five shots at this "renegade", who "had assured his career by pouring out the blood of his brothers in the famous insurrection in Rakovica", but, owing to a remarkable accident, did not succeed in killing the general. Whereupon the would be murderer Zerajic fired the sixth and final bullet through his own head and immediately fell dead. Following this incident Varešanin was directly raised to the rank of Freiherr by the Kaiser. Although the attack had been unsuccessful the 63 year old general started to think about his retirement and asked for his release from the service which was granted on the 10th of May 1911 and he was succeeded by General Oskar Potiorek. On the 10th of July 1911 General Varešanin retired after 45 years of outstanding service and was simultaneously awarded of the grand cross of the Order of Leopold. General der Infanterie Marian Freiherr Varešanin von Vareš died in Vienna on the 22nd of April 1917.