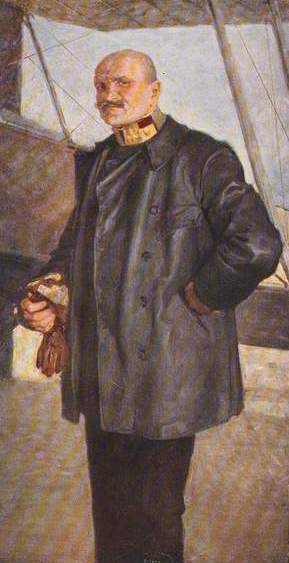 Emil Uzelac was born on the 26th of August 1867 at Komorn (Hungary) but his home was in Svarca in Croatia where his father was a small farmer. In his later years he always spoke proudly of his career from such humble origins and told the story that his father was such a poor farmer that he was eating "onions like other apples and potatoes directly from the dirt" and only the "good old Kaiser Franz Joseph" gave him, the son of such a poor farmer, the possibility to reach generals rank! Maybe this was more his personal legend than reality but it demonstrated his warm and grateful feelings to his Kaiser. After passing the course at the Technische Militärakademie (academy for engineers and artillery) he was transferred as a Leutnant to the 2nd Genieregiment (engineers) on the 18th of August 1888. While performing garrison service in Pola and Trieste he did some electro-technical studies and passed examinations at the nautical academy in Trieste which additionally earned him the additional rank of Leutnant in the merchant navy. On the 1st of November 1898 he attained the rank of Hauptmann 2nd class. Two years later he was transferred to the Geniestab (general staff of the engineer corps) and posted to the Geniedirektion at Klagenfurt. Whilst serving in  this position he was promoted to Major on the1st of May 1908.

During his whole lifetime Emil Uzelac was always greatly interested in any technical progress especially in "heavier than air" aviation. He had a lot of contact with the early aviation pioneers like Franz Hinterstoisser and learned flying by himself in a very short time. Uzelac realized that this new technology was not a sport for young (and rich) officers and saw the great possibilities for the army by utilizing aircraft. When the progressive and modern thinking officers centred around Erzherzog Franz Ferdinand and Conrad von Hötzendorf began to reform the old army into a modern  fighting force they made Uzelac commander of the Luftschiffer-Abteilung - the early and poor basis for all Austro-Hungarian aviation - on the 24th of April 1912. To choose this 45 year old engineer officer to become the "father" of the Austro-Hungarian air-force was the best they could do! He began without any money, no planes and no personnel except a handful of young and enthusiastic, privately trained officers and - worst of all - without any understanding by most of the higher commanders. At this time the majority of the army commanders saw only "useless fairground amusements" in balloons and airplanes. His first task was to regulate pilot training (including the creation of the field pilots' badge, which he personally received in February 1913) and start that regular training as soon as possible. In Summer 1912 Erzherzog Franz Ferdinand and the chief of the general staff Conrad von Hötzendorf managed to organize a visit of the Kaiser to an aviation-show at Wiener Neustadt. The Kaiser was impressed and the Luftschifferabteilung received greater funding and more goodwill in the future. Uzelac, who was promoted to Oberstleutnant on the 1st of May 1912 and honored with the military merit cross in October 1912 soon comprehended that this was not enough. The main opinion was that the air force could only help the "real troops" by observing behind the enemies' lines and direct the fire of the artillery onto worthwhile targets - and even this could only be accomplished by a commissioned officer! Oberstleutnant Uzelac fought like a lion but it was early 1914 before he received the permission to train NCOs as pilots too.

All his efforts on the military aviation front were recognized by many different awards. He received the commanders' cross 2nd class of the Saxon-Ernestine house order in January 1913, the 2nd class of the Prussian crown order in May 1914 and the Orden der Eisernen Krone 3.Klasse (order of the Iron Crown 3rd class) on the 29th of August 1914. In November 1914 he was promoted to the rank of Oberst after 26 years of army service. During all this time he remained a flying enthusiast and legend has it that he had flown all types of aircraft ever used by the Austro-Hungarian Fliegertruppe. In the face of his important position he was strictly forbidden to fly during the war but there are dozens of stories to the effect that when Oberst Uzelac was visiting a Fliegerkompanie in the field as he often did, he looked around and if there were no senior officers to be seen he pulled his famous flying cap out of his pocket and entered the next plane and did some quick circuits around the airfield. On the occasion of his 75th birthday in 1942 the aviation historian Oberst der Luftwaffe J. Diakow published a booklet, giving dozens of former comrades the possibility to tell their anecdotes about their former commander and beloved so-called "Uz" and the sense was always the same; he was more than a commanding officer. The young (the flying personnel were very young) men saw in him a father figure and a comrade. He liked and honored heroism and flying skills above all else and knew when he had to close an eye - or sometimes two - regarding the discipline of young officers. It is no surprise that when the Luftfahrerabzeichen was introduced he himself passed the training and earned it like the Feldpilotenabzeichen before. On the 6th of July 1915 he received the knights' cross of the order of Leopold with war decoration and in May 1916 the 2nd class of the Ottoman Medjidie-Order and the Iron Cross 2nd class. 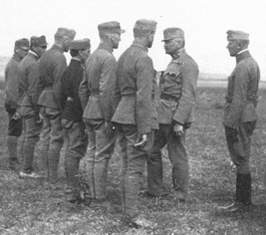 When the old Kaiser Franz Joseph died in the autumn of 1916 a whole era was also laid to rest. The young Kaiser Karl had respect for the work of Oberst Uzelac and awarded him the Orden der Eisernen Krone 2.Klasse mit Kriegsdecoration (neck badge of the Order of the Iron Crown with war decoration) on the 22nd of January 1917 but finally he did not trust the old commanding officers and tried to get his "own" men into command positions. Kaiser Karl introduced the new post of a General-Inspektor der Luftstreitkräfte whose only function was to command the commander of the Luftstreitkräfte - Oberst Uzelac and appointed Generaloberst Erzherzog Joesph Ferdinand, a well known balloon enthusiast, against all advice to this command in July 1917. It must be said that the 5 years younger archduke was an aviation-expert too and both officers had more in common in their opinions than may be seen at the first sight. From the basis of respecting each other as aviators both did an excellent job of work for the Austro-Hungarian air forces under the given circumstances until the end. But Emil Uzelac never forgot this. It was told that the king of Yugoslavia asked him during the days when Kaiser Karl tried to regain the crown of Hungary what he would do now, in the face of his officers' oath to the Kaiser if Karl should be successful. Uzelac answered with a parable:" If Kaiser Karl would be Napoleon, I would be Marshall Ney" and after some silence "But don't worry, Kaiser Karl would never be a Napoleon!". In June 1917 Oberst Uzelac received the Prussian Iron Cross 1st class and on the 27th of December 1917 he was honored by the award of the military merit cross 2nd class with war decoration and swords. He was finally promoted to Generalmajor on the 1st of May 1918.

After the wars end Generalmajor Uzelac who was Croat and orthodox Christian by birth settled down in Petrinja (Peterwardein) and became a General in the newly formed Yugoslavian air force. One of his first responsibilities was to translate all the Austro-Hungarian instructions and technical manuals regarding aviation into the Serbian language and to buy new airplanes for the new royal air force mainly in France. When Croatia became during World War 2 an independent state General Uzelac naturally became the commander of this air force too. When General Milan (Emil) Uzelac died at Petrinja on the 7th of January 1954 he could look back on a unique life, being the founder and "father" of 3 different air forces.