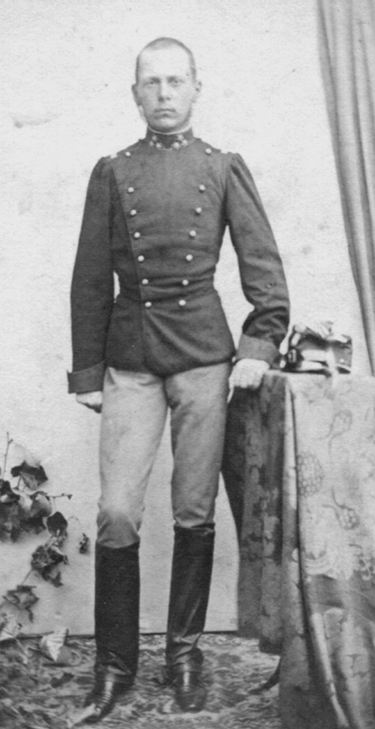 Alexander Graf von Üxküll-Gyllenband  was born in Potsdam on the 2nd of October 1836 and joined the 11th Uhlans as a cadet on the 8th of July 1854. He was commissioned in the 2nd Uhlans on the 7th of September 1854 as a Unterlieutenant 2. Classe and promoted to Unterlieutenant 1. Classe on the 1st of June 1857and to Oberlieutenant on the 24th of April 1859. Attached to the Adjutants Corps on on the 1st of May 1859 he saw service during the war of 1859 as an adjutant to the Kaiser. Promoted to Rittmeister 2. Classe on the 28th of January 1861 he was awarded the Knight's Cross with Swords of the Merit Order of Adolf of Nassau on the 16th of July 1860 and the Knight's Cross 2nd Class of the Tuscan Military Merit Order on the 6th of June 1861 in which year he was also appointed as a Kämmerer. Assigned back to 2nd Uhlans on the 14th of December 1861 he was promoted Rittmeister 1. Classe on the 31st of March 1864 and awarded the Prussian Order of the Red Eagle 3rd Class on the 29th of August.

He saw action in the war against Prussia in 1866 in Cavalry Brigade Boxberg at Königgrätz and at Blumenau. Promoted to Major and Flügel-Adjutant to the Kaiser on the 23rd of April 1869 and to Oberstlieutenant on the 23rd of April 1873. He had been awarded the Ottoman Order of Medschidie 3rd Class on the 5th of October 1869 and the 4th of January 1870 he received the Ottoman Order of Osmanie 3rd Class, the Commander's Cross of the Royal Greek Order of the Redeemer and the Royal Prussian House Order of Hohenzollern 2nd Class followed on the 1st of October 1872 by the Knight's Cross of the Imperial Russian Saint Stanislaus Order 2nd Class with Crown and the star, the Knight's Cross of the Royal Prussian Crown Order 2nd Class and the Saxon Albrechts Order 2nd Class.

Assigned to the 14th of Dragoons on the 1st of May 1873 he became commander of the regiment on the 1st of November 1875 with promotion to Oberst on the 1st of November 1876 with seniority from the 15th of December 1876. He was awarded the Knight's Cross of the Imperial Russian St. Annen Order 2nd Class on the 8th of January 1876 and the Grand Cross of the Royal Spanish Order of Isabella the Catholic on the 1st of July 1878. Graf  Üxküll led the regiment in the occupation of Bosnia in 1878 and was reappointed as a Flügel-Adjutant to the Kaiser and military plenipotentiary to the Court at Saint Petersburg on the 20th of October 1880 in which appointment he received the Commander's Cross of the Saint Stanislaus Order with Star. 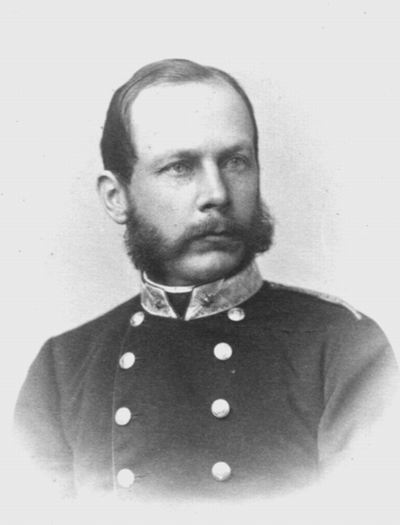 On the 27th of September 1882 he became commander of the 13th Cavalry Brigade and was promoted to Generalmajor on the 1st of November 1882 with seniority from the 8th of November 1882. Transferred as commander of the 1st Cavalry Brigade on the 5th of May 1883 he was promoted Feldmarschall-Lieutenant on the 1st of November 1887 and took over command of the Cavalry Division in Vienna on the 19th of July 1888 followed by the same position in Lemberg on the 26th of December 1888. Appointed commander of the 32nd Infantry Division in December 1889 and awarded the Knights Cross of the Leopold Order the same year. Appointed commander of 6th Corps on the 19th of October 1891 followed by command of the 2nd Corps at Vienna from September 1894 to November 1905 and finally the 4th Corps from November 1905 until May 1908. He was promoted to General der Kavallerie on the 1st of May 1895 with seniority from the 27th of April. He was additionally Inhaber of the 16th Hussars on the 21st of October 1891 and a Privy Councillor on the 17th of December 1891 respectively and also a general army inspector from November 1905 to October 1908.  His final appointment was as Kapitän of the Leibgarde-Reitereskadron from the 5th of Jan 1909 until his death in Berchtesgaden on the13th of July 1915. Appointed a life member of the Austrian House of Lords,  Alexander Graf von Üxküll-Gyllenband never married or had children.

Graf Üxküll was certainly one of the most highly decorated generals of the time and in addition to the awards already mentioned in the body of the text he further received the following awards and decorations: 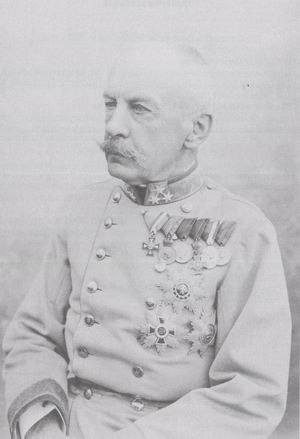 10th July 1885: Commander's Cross of the Saxon-Weimar House Order of the White Falcon .

9th January 1889: Knight's Cross of the Order of Leopold.

19th October 1901: Grand Cross of the Saxon-Weimar House Order of Vigilance or of the White Falcon.

18th October 1903: Brilliants to the Russian. Alexander-Nevsky Order, Merit Order of the Prussian Crown , Golden Star to the Grand Cross of the Saxon Albrechts Order.

5th July 1914: Kaiser's proclamation (published 11th July 1914) for the celebration of 60 years service with the award of the Brilliants to the Military Merit Cross