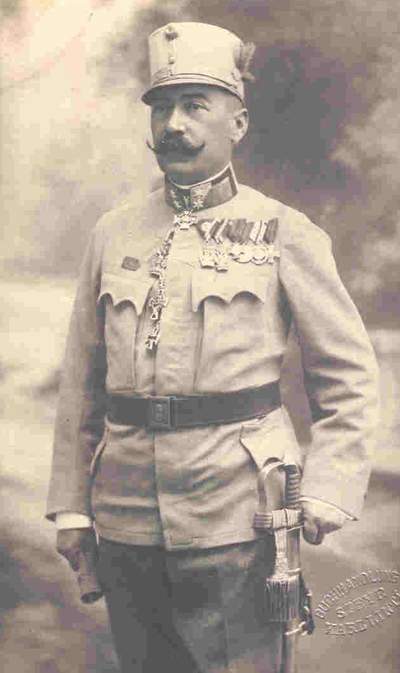 On the 20th of April 1904 Oberst Trollmann assumed command of Landwehr infantry regiment number 1 at Vienna. As was common for regimental commanders, after four years in command, he received the 3rd class of the Order of the Iron Crown on the 1st of March 1908. On the 16th of January 1910 he took over command of the 43rd Landwehr infantry brigade at Graz shortly followed by his promotion to Generalmajor on the 1st of May with seniority from the 6th of May 1910. In addition to this post he was the commander of the Landwehr Korps-Offiziersschule (corps officers' school) at Graz. For his achievements in the field of officers' education he received a commendation from the k.k. Landwehr minister on the 30th of November 1912. On the 26th of October 1912 he was appointed to command the 46th Landwehr infantry division at Krakau (Kraków). On the 1st of May 1913 he received his promotion to Feldmarschall-Leutnant, with seniority from the 7th of May, shortly followed by his appointment to command the 1st infantry division at Sarajevo on the 7th of June 1913. On the 30th of March 1914 he switched to the command of the 18th infantry division at Mostar. Normally as a divisional commander Feldmarschall-Leutnant Trollman would have now received the knight's cross of the Order of Leopold but the outbreak of the war prevented this. In a similar vein he never received in peacetime the military merit cross but the coming of the war would change this oversight. With it's five mountain brigades -1st, 2nd, 3rd, 6th and 13th, the 18th infantry division was the largest infantry division within the Austro-Hungarian armed forces with battalions from regiments throughout the length and breadth of the entire monarchy.

With the outbreak of war, Trollmann led his 18th infantry division as a part of Feldzeugmeister Wenzel von Wurm's XVI Corps in Feldzeugmeister Oskar Potiorek's 6th Army during the invasion of Serbia. The divisional lineup had changed somewhat on mobilization and now consisted of the 4th, 5th 6th and 8th mountain brigades. 6th Army deployed to the area of the middle Drina east of Sarajevo between Višegrad and Foča. The initial campaign against Serbia was a failure and following local successes in the area of Višegrad and Priboj and the defeat of General Liborius Frank's 5th Army, 6th Army withdrew from Serbian territory. When FZM Potiorek launched his 2nd offensive on the 6th of September 1914, XVI Corps supported Frank's right flank again crossed the Drina south of Loznica and was involved in heavy fighting in the bridgeheads there followed by the capture of the Romanja planina plateau from the 18th to the 30th of October and the offensive against and subsequent capture of Valjevo from the 24th of October to the 15th of November. Following the battles on the Kolubara and Ljig in late November XVI Corps withdrew behind the Kolubara from the 5th to the 7th of December, Valjevo was retaken by the Serbs and the corps continued it's withdrawal behind the Save river.

Although the Serbian offensives had ended in failure, FML. Trollmann had handled his division competently and well and on the 25th of October 1914 he was honored with the 2nd class of the Order of the Iron Crown with war decoration and on the 29th of November 1914 with the 2nd class of the Military Merit Cross with war decoration. Iganz Trollmann was the first officer to receive the neck badge of the newly introduced higher classes of the Military Merit Cross! In December 1914 he assumed command of the so-called Kombiniertes Korps which was was reorganized into the 19th Corps in January 1915. The corps was transferred north to 3rd Army and took part in the two offensives over the Carpathian mountains followed by the Russian counter-offensive and the Easter battles. Subsequent to the launch of the highly successful Gorlice-Tarnów offensive at the beginning of May 1915 he led his corps at the battle of Wola Michowa on the 8th of May , the battle of Sanok on the 9th and 10th followed by the general pursuit to the north and east. escortnavi The corps took part in the battle to recapture Przemyśl from the 16th of May to the 4th of June and the battle at Mościska also on the 4th. After further fighting at Mościska, Lubaczów, Gródek and Magierów he was honored with the award of the grand cross of the Order of the Iron Crown with war decoration on the 23rd of June 1915 and received the decoration 1st class of the Society of the Red Cross with war decoration (31st May 1915) and the Prussian Iron Cross 2nd class (20th October 1915). He spent the remainder of the summer commanding XIX Corps in continued fighting at Bukaczowce, Bóbrka, the Gnila Lipa, the Bug and the offensive in East Galicia in the early autumn. On the 12th of December 1915 he was honored with the 1st class of the Order of Leopold with war decoration.

In late September the corps moved south for the third attempt to defeat Serbia in co-operation with their German allies. The corps crossed the river Save from the 6th to the 8th of October and during the successful advance south moved to the Albanian mountains by the beginning of December. On the 20th of December 1915 the Austro-Hungarian 3rd Army of Generaloberst von Kövess was assigned the mission to invade and occupy Montenegro. While the VIII Corps pursued the retreating Serbians from the East, Trollmann's XIX  Corps was to attack from the west out of the Austro-Hungarian port of Cattaro (Kotor). Trollmann had under command 47th Infantry Division and Feldmarschall-Leutnant Sorsichs's group and with the exception of the 14th mountain brigade, most of his command consisted of Landsturm formations. The direction of attack led out of Cattaro against Montenegro over the Lovčen mountain which dominated Cattaro bay. With the support of naval artillery fire which began on the 8th of January 1916 the mountain was taken by the 11th. Following the capture of the Lovčen, Cetinje which was only six kilometres away fell on the 13th. For his successful capture of the Lovčen Heights he received the Kaiser's commendation on the 13th of January 1916, which allowed him to wear the Bronze Military Merit Medal (Signum Laudis) with war decoration and swords and for his successful actions against Durazzo he was again honored with a commendation from the Kaiser on the 23rd of March 1916, which allowed him to wear the Silver Military Medal (Signum Laudis) with war decoration and swords.  On the 25th of May 1916 he received the Prussian Iron Cross 1st class. On the 1st of November 1916 Ignaz Trollmann was promoted to General der Infanterie with seniority from the 13th of November, possibly the last promotion to the rank of full general signed by Kaiser Franz Joseph I.!

For the remainder of his time in command of XIX Corps, Trollmann remained in the Balkans and especially the Albanian front. On the 9th of April 1917 GdI Trollmann was honored with the title of Geheimer Rat (Privy Councillor). In August 1917 his successful capture of the Lovčen heights was honored with the award of the knight's cross of the Military Maria Theresian Order followed by the routine ennobling to Freiherr on the 17th of August 1917. On the 19th of January 1918 he received the predicate "von Lovcenberg" to his noble title. In September 1917 he was honored with the award of the Ottoman Golden Liakat Medal and the Ottoman War medal, the so-called Iron Crescent. In October 1917 he was released from commanding the 19th corps and sent on a short leave but no new field command found for this remarkable general. On the 1st of December 1918 General der Infanterie Ignaz Freiherr Trollmann von Lovcenberg retired to Graz where he died on the 23rd of February 1919.