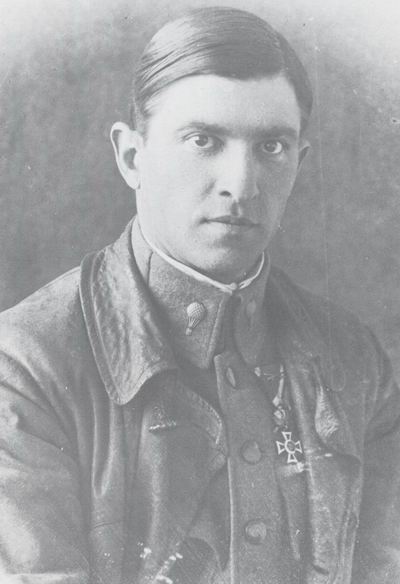 Raoul Stojsavljevic was born on the 29th of July 1887 in Innsbruck. His father was a professional army officer who originated from Croatia and his mother was a native Tyrolean, Adelheid Hohenauer. He attended a military middle school and following his graduation from the Military Academy at Wiener-Neustadt he was commissioned as a Leutnant on the 18th of August 1908 (1 Sep 1908) in the Bruck an der Mur based Feldjägerbataillon Nr. 21. Formed in 1849, FJB 21 had fought with distinction at Magenta in 1859 and at Custozza in 1866. It's personnel were almost exclusively German-Austrians. Employed as a company officer, by 1911 the gifted skier was employed as a corps skiing instructor. On the 14th of April 1913 he started flying training at Wiener-Neustadt from which he was awarded Austrian pilot certificate 114 on the 2nd of July the same year. Promoted to Oberleutnant on the 1st of May 1913, he participated on the 14th of October as a passenger in the first Austro-Hungarian flight to cross the Alps from Vienna to Görz (Gorizia) in a two-seater piloted by Oberleutnant Eugen Elsner and was himself appointed as a field pilot on the 7th of April 1914.

On mobilisation in 1914, Oberleutnant Stojsavljevic's squadron - Fliegerkompanie (FliK) 1 was assigned to the Northeastern front in Galicia. He flew numerous reconniassance sorties with Flik 1 before being transfered to Flik 13 as deputy company commander and senior pilot (Chefpilot) at the end of November 1914. On the 16th of February 1915 whilst piloting a two-seater on his 49th operational sortie, accompanied by observer Leutnant Johannes Reichel he was compelled to execute an emergeny landing in a snow storm behind enemy lines. Stojsavljevic and Reichel successfully destroyed their downed machine before being captured by the Russians and then spent six days in captivity before managing to escape. They remained at large for some four months, eventually hiding in the Galician capital Lemberg until that places eventual liberation by Austro-Hungarian forces on the 22nd of June 1915 in the wake of the extremely successful Gorlice-Tarnów offensive of the previous month. Oberleutnant Stojsavljevic was awarded the Bronze Military Merit Medal on the 11th of September 1914 (P.V.Bl. 56/14) and the Military Merit Cross 3rd Class with War Decoration on the 19th of July 1915 (P.V.Bl. 108/15) for his distinguished service during the opening phase of the war on the Eastern front. He had additionally been awarded the Prussion Iron Cross 2nd Class on the 28th of May 1915. Following Italy's entry into the war in May and the opening of the Southwestern front, Oberleutnant Stojsavljevic was transfered to the South Tyrol based Flik 17 followed by his promotion to Hauptmann (247) on the 1st of September 1915 and a further transfer to Flik 16 at Villach later in the month. Appointed as company commander in December, he led the company in its primary mission of providing reconniassance sorties in support of the Austro-Hungarian forces defending the Carinthian border sector of the front. At Flik 16, Stojsavljevic gained his first four aerial victories in two-seat aircraft and the award of the Order of the Iron Crown 3rd Class with War Decoration and Swords on the 20th of June 1916. In order to hone his skills as a fighter pilot was detached to Flik 34 in February 1917 where he learned to fly the Hansa-Brandenburg D1 fighter. He became an ace on the 13th of February 1917 after shooting down a Farman two-seater aircraft south of Kostanjevica on the Doberdo Plateau sector of the Isonzo front although he was himself temporarily put out of action following a crash at Zaule suffering a painful knee injury. He received further useful experience as a result of his attachment in May 1917 to the Prussian Jasta 6 on the Cambrai sector of the western front after which he returned to command Flik 16. Back at Flik 16, Stojsavljevic pioneered the art of high speed photographic reconniassance and doubled his existing score to ten confirmed victories, his last being on the 21st of November 1917. Hauptmann Stojsavljevic was severlely wounded during the execution of a reconniassance sortie on the 12th of January 1918 whilst flying a Hansa-Brandenburg C1 fighter in which an enemy round shattered a thigh bone. He successfully managed to land his badly shot up aircraft and following surgery returned to duty in October 1918. This itself was a great achievement - the doctors thought that at best he would only be able to walk again with the aid of a walking stick. Having been awarded the Golden Bravery Medal for Officers on the 18th of April he was assigned as commander of the officers' flying school at Wiener-Neustadt where he remained until the collapse in November 1918. Additionally awarded the Knight's Cross of the Order of Leopold with War Decoration and Swords and the Prussian Iron Cross 1st Class he was also of course awarded retroactively the Swords to all his previously awarded wartime decorations in 1917 on their introduction. Following the war's end he declined to accept an invitation to join the airforce of the newly created South Slav state and became a citizen of the new Austrian republic initially serving with an air unit of the Volkswehr and then with the police. Retiring from military service he attempted to start a commercial air firm on the Vienna-Budapest run which was short-lived due to the Allied Control Commission's refusal to allow this activity. Returning briefly to military service as a Major in 1922 in Alpenjägerregiment 12 at Innsbruck he then took over the formation and directorship of the newly built airport at Innsbruck in 1925. He founded a new commercial service in 1927 and joined the large Austrian commercial airline ÖLAG in 1928. On the 2nd of September 1930 Major Raoul Stojsavljevic was killed in a flying accident whilst piloting Junkers-F13 "A3" after crashing in thick fog into the Krottenkopf massif north of Garmisch-Partenkirchen. He was buried with full honours at the Westfriedhof in Innsbruck.