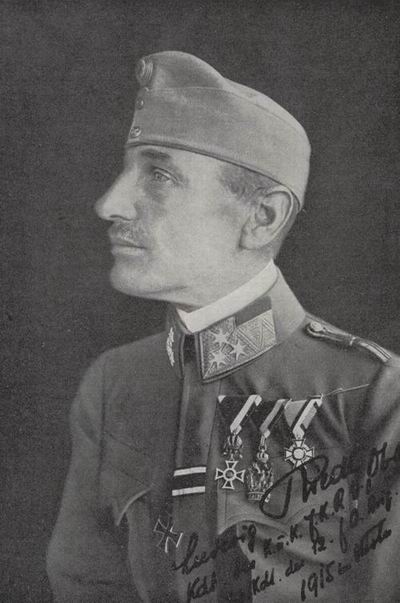 Ludig Riedl's family originated from the Hungarian district of Zala. His grandfather was an Oberleutnant in the Bombardier Corps and his father Carl, had already participated as a 14 year old volunteer in General György Klapka's staff at Komoron during the Hungarian insurrection of 1848. He then became an officer in hussar regiment number 1, graduated from the central equitation school and ultimately a Rittmeister in hussar regiment number 3. He took part in the campaigns of 1859 and 1866 in Italy and was severely wounded leading his squadron during the attack by the Pulz and Bujanowics brigades at Villafranca. For his performance during the campaign Rittmeister Carl Riedl was awarded the Military Merit Cross. He died in Pőspőki near Pressburg in 1902.

Ludwig Riedl was born on the 17th of August 1869 in Xaipe near Csakaturn. At the age of ten he entered the Militär-Unterrealschule in Güns followed by the Militär-Oberrealschule in Mährisch-Weißkirchen and finally the technical military academy. He served from the 18th of August 1889 until the summer of 1891 as a Leutnant  in corps artillery regiment number 5 at Komoron and then until the autumn of 1892 at the military riding instructors' institute in Vienna. Following his successful completion of the riding instructors' course he then served until the autumn of 1895 as a riding instructor at the 12th artillery brigade equitation school as well as battery service with the 5th battery of corps artillery regiment number 12. He had in the meantime been promoted to Oberleutnant on the 23rd of December 1893. From 1895 until 1897 he attended the Kriegsschule (war school) in Vienna and in the autumn of 1897 attached to the general staff corps. Riedl, who was one of the few officers to have both successfully graduated from the military riding instructors' institute and the war school served from November 1899 until May 1902 as a Hauptmann 2. Klasse and battery commander in divisional artillery regiment number 18 at Eperjes.

Riedl then served in various general staff posts including the railways department where he was awarded the Bronze Military Merit Medal on the 12th of August 1908 and eventually becoming the chief of staff of the 27th infantry division at Kassa in which post he remained until November 1913 ultimately as an Oberstleutnant (1st May 1912). From November 1913 until the outbreak of the war he was an half-regiment commander in field artillery regiment number 12 at Budapest. At mobilization he was assigned as chief of staff to the military headquarters and rear area command at Temesvar where he organized amongst other things the maintenance of Orsova's defences. On the 5th of October at his own request he was assigned to front line duty and from the 7th of October until the 31st of December 1914 was the temporary commander of field artillery regiment number 33. From the 17th of October he led the regiment at the battle of the San near Baricz and in heavy fighting southeast of Przemyśl and from the 26th of October onwards he was also temporary commander of the 11th artillery brigade. On the 21st of December he was awarded the Order of the Iron Crown 3rd Class with War Decoration  and after a further short assignment as a general staff officer Riedl was appointed commander of the 1st field artillery regiment (Craców) on the 1st of January 1915 in the 12th infantry division (Feldmarschall-Leutnant Paul Kestřanek) of VI Corps (Feldmarschall-Leutnant Arthur Arz von Straussenburg).

His superlative preparation and handling of the divisional artillery during the May offensive at Gorlice-Tarnów opposite the Russian strongpoint at Pustki would later lead to his award of the Military Maria Theresia Order. Shortly after the commencement of the offensive he was appointed temporary commander of the 12th artillery brigade and led it in the string of successful engagements by VI Corps from Gorlice to Brest-Litovsk and then on the River Strypa in East Galicia in the new years offensive of 1915/16. He was awarded the Knights Cross of the Order of Leopold with War Decoration on the 1st of July and the Prussian Iron Cross 2nd Class on the 20th of October1915.

When on the 5th of June 1916 he was replaced as commander of the 12th artillery brigade by Generalmajor Rudolf Andersch, he was appointed as the permanent commander of the Royal Hungarian 39th Honvéd artillery brigade in the neighbouring sector. With this command he took part in the difficult defensive battles during the Brussilov offensive as part of the Royal Hungarian 39th Honvéd infantry division until the 15th and then until the 18th of August under command of Corps Hofmann. From the 18th of August onwards, Riedl's brigade was back under command of the 39th Honvéd infantry division and later with Group Generalmajor Metz during the defensive battle at Tlustobáhy-Horozanka-Dryszcow. On the 31st of August 1916 the 39th Honvéd artillery brigade was transported to Siebenbürgen and took part in the successful campaign there against the Russians and Rumanians.

Following his attendance at a sound ranging course he formed an artillery school of gunnery at Nagy in the autumn of 1917 which however was soon disbanded on account of conditions at the front. on the 29th of January 1918 he assumed command of the Carnic alps sector in the South Tyrol which on the 21st of April was renamed as the 98th infantry brigade. On the morning of the 3rd of November 1918 the brigade had to abandon the positions which it had always successfully maintained in the general withdrawal. As a consequence of the confusion pertaining to the armistice he was taken prisoner by the Italians but was still promoted to Generalmajor on the 11th of November 1918.

On his release from Italian captivity the general reported to the Royal Hungarian High Command in Siosok on the 7th of October 1919, was again placed on active status on the 17th of February 1920 and appointed military governor of the coal industry in Hungary in which position he served until the 1st of November 1921. On that date he was promoted to Feldmarschall-Leutnant (Altábornagy) and placed at "disposal", retiring on the 1st of November 1922. Altábornagy Ludwig Riedl was awarded the Military Maria Theresia Order at the 193rd promotion on the 25th of October 1927 and died on the 7th of May 1936.