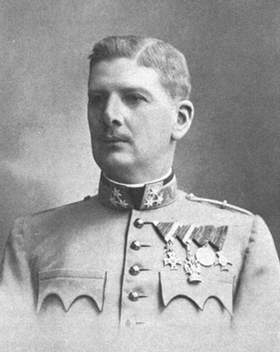 K.k. Generalmajor Rudolf Brudermann, married to Gisela von Babarczy, received the knights' cross of the Leopold order in March 1858 and as a consequence was ennobled with the predicate "Ritter von". In order that this personal title should become become an hereditary one it was essential  that his three sons Anton, Rudolf and Adolf take up a military career.

The most successful of the three, Rudolf Nikolaus, was born on the 9th of January 1851 in Gyöngyös (Hungary), commenced his education at the Cadett-Institut at Hainburg and in 1865 entered the Theresian Militär Akademie at Wiener Neustadt which he left in 1869 on being commissioned as a Leutnant in ulan regiment number 11, the same as his brother Anton a few years previously. He was promoted to Oberleutnant (1st May 1874) and, after finishing the Kriegsschule at Vienna (1874), attached to the Generalstab where he was promoted to Hauptmann 1.Klasse im Generalstab (captain 1st class of the general staff) on the 1st of November 1877. at his own request  he was transferred with the rank of Rittmeister 1st class, to the body of reserves of ulan regiment number 2 on the 1st of April 1878. He married Marie Albine (born Jürgens) on the 2nd of July 1878 but the marriage remained childless and he returned to active duty on the 1st of January 1879. He was now assigned to the ulan regiment number 1 and become an instructor at the cavalry cadet institute at Mährisch-Weißkirchen. In 1885 he was transferred to dragoon regiment number 14, which was famous on account of it's tradition of being permitted to remain clean shaven. Whilst serving with this regiment he received his promotion to Major (1st November 1885) and Oberstleutnant (1st November 1888) before he took over the command on the 5th of April 1891 followed by his promotion to Oberst on 1st November of the same year.

As usual, after 3 years satisfactory service commanding a regiment, he received the Orden der Eisernen Krone 3.Klasse (Order of the Iron Crown 3rd class) in March 1895. Two years later in March 1897 Rudolf Ritter von Brudermann received the command of the 15th cavalry brigade at Tarnopol, followed by promotion to Generalmajor on the 18th of May of the same year. Between March 1900 and the end of March 1904 he was garrisoned at Krakau as commander of the 7th cavalry division. Besides his promotion to Feldmarschall-Leutnant (2nd May 1901) his leadership there was honoured by the award of the knights' cross of the Leopold order in April 1904.

In March 1904 the enthusiastic cavalry general was attached to the General-Kavallerie-Inspektor Erzherzog Otto and after the retirement of the archduke in July 1906 Rudolf Ritter von Brudermann took over this position. It seems that he had now reached, not even 55 years old, the desired pinnacle of his career. He was promoted to General der Kavallerie (26th April 1907), received the honorary post of Oberstinhaber of ulan regiment number 1 (February 1907) and honored with the Orden der Eisernen Krone 1.Klasse (Grand cross of the Order of the Iron Crown) in August 1908. During this time he received recognition from several  foreign states which awarded him the Grand crosses of the Saxon Albrechts order (July 1905), of the Victoria order of Great Britain (February 1908), of the Order of the Crown of Württemberg (October 1908), the Sword order from Sweden (February 1909) and the Prussian Red Eagle Order (October 1909). 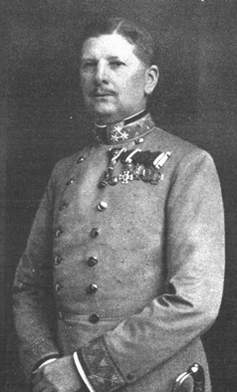 Rudolf Ritter von Brudermann had exactly the command he had always desired but from a practical point of view his appointment  was disastrous for the mounted troops! He had never seen action and all his experiences were from manoeuvres and from the manuals. He lived in the glorious spirits of 1848 and 1859, the good old days of cavalry traditions were in his mind and he had not recognized the signs of the times! In his opinion a horseman should only be an expert in riding-skills and without any fear of battle, "his" cavalry should ride in magnificent, colourful uniforms, recklessly and with drawn sabre attacking in an open field-battle. He ignored any new weapons, like machine guns, and did everything to keep them out of the cavalry units. When the other units of the Austro-Hungarian army received their new "hechtgraue" field-uniforms he blocked the efforts to introduce them to the cavalry too. For him "Camouflage" and "Heroism" were absolutely incompatible. Because of his ignorance the Austro-Hungarian cavalry had to pay a bloody price on the battlefields of 1914/15.

Some officers in senior positions, especially the chief of the general staff, Franz Conrad Freiherr von Hötzendorf, were aware that he was the wrong man in this post and as usual in such cases they gave him a promotion! In October 1912 GdK Rudolf Ritter von Brudermann become the new Armee-Inspektor and the later Generaloberst Graf Huyn took over the post of General-Kavallerie-Inspektor. Normally the post of an Armee-Inspektor was held by the army commanders designate in case of a war but when the war broke out in 1914 Conrad von Hötzendorf again tried to lessen the the effect of GdK Brudermann's perceived abilities by entrusting him with the command of 3rd Army, which was initially on the defensive in the area of Lemberg whilst the1st and 4th Army's were to take the offensive to the North. Following difficulties with his superiors at AOK and after being badly defeated during the battle of Lemberg and especially at Zloczów on 26th and 27th August 1914, Rudolf Ritter von Brudermann was relieved of his command and was, at his own wish, retired on the 24th of November 1914 and returned to his home in Vienna's 3rd district.

Following  the war and especially after 1930, his mistakes were long forgotten, he was often to be seen at veterans' events. The people loved him and when he appeared in his old white generals' uniform complete with decorations they looked at him as a symbol of the good old days that had vanished forever. In 1936 he was elected as honorary president of the "Vereinigung Alt Neustadt", the union of veterans from the Theresian Military Akademie at Wiener Neustadt. He died only a few days after Generaloberst Dankl and was buried at the Zentralfriedhof on 21st of January 1941.