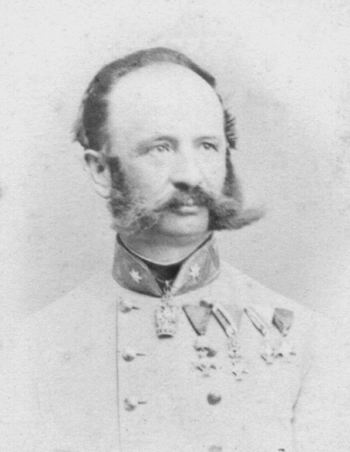 Joseph Philippović von Philippsberg was born on the 30th of April (some sources give the 28th of April) 1818 as the son of Hauptmann Leopold Philippović von Philippsberg of an old Bosnian Christian family at Gospić. The family had earned it's nobility through the actions of Leopold's father, Lieutenant Elias Philippović of the Karlstädter Liccaner Grenzinfanterieregiment Nr.1 in 1781. Like his forebears Joseph entered military service at the age of 16 on the 1st of September 1834 in the Liccaner Grenzinfanterieregiment Nr.1 as a cadet. Appointed a regimental cadet on the 1st of February 1836 he was transferred to the Pioneer-Corps on the 1st of April of the same year and underwent his military training at the Pioneer Corps School at Tull. He was commissioned as an Unterlieutenant II. Classe on the 1st of April 1839 and to Unterlieutenant I. Classe on the 16th of December 1842. On his transfer to the General-Quartermaster Staff on the 29th of September 1843 he received a simultaneous promotion to Oberlieutenant. Promoted to Hauptmann on the 20th of September 1847 he then participated in the 1848 and 1849 campaigns in Hungary. He initially saw action as the deputy chief of staff of 1st Corps under Feldmarschall-Lieutenant von Jellačić  during the insurrection in Vienna and in particular at the Sophien-Brücke and at Schwechat. He was lightly wounded during the taking of Vienna and was then involved in the engagement at Parendorf on the 16th of December. He was promoted to Major on the 13th of November 1848 in the Warasdiner Grenz-Regiment and for his service in 1848 he was awarded the Military Merit Cross the following year. During the campaign in 1849 Major von Philippović fought in the engagement at Téteny on the 3rd of January, in the battles at Kápolna on the 26th and 27th of February, at Isazeg on the 6th of April, in the three reconnaissance engagements at Pest on the 11th, 16th and 21st of April, in the assault on Neusatz on the 12th of June, in the encounter at Ó-Becse on the 25th of June and in the battle at Hegyes on the 14th of July. For his outstanding performance at Hegyes he was awarded the Knight's Cross of the Leopold Order.

On the 12th of September 1851 von Philippović was appointed as the Adjutant-General to the Ban of Croatia with the simultaneous promotion to Oberst-Lieutenant followed by his promotion to Oberst and appointment as commanding officer of the Warasdiner-Kreuzer 5. Grenz-Regiment on the 1st of January 1853. He married Leontine von Joelson (1832-1893) on the 27th of December 1856 with whom he had five children, two sons and three daughters. Tragically both sons died in infancy and the daughters all died at a relatively early age. Promoted to Generalmajor on the 19th of April 1859 he commanded a brigade during the war against France and Piedmont in Benedek's VIII Corps. During the battle of Solferino on the 24th of June he brigade fought for twelve hours against a superior enemy force during which his 4,545 man brigade suffered losses of 23 officers and 847 NCOs and men. In recognition of his conduct and leadership at the battle of Solferino Generalmajor von Philippović was awarded the Order of the Iron Crown 2nd Class on the 17th of December 1859 and raised to an Austrian barony on the 20th of March 1860. In the years 1861, 1864 and 1865 he was assigned as the imperial commissioner with the Serbian church congress and on the occasion of the second of these congresses on the 24th of November 1864 he was awarded the Knight's Cross of the Order of Saint Stephen.

In the war against Prussia and Italy in 1866 Freiherr von Philippović served as deputy commander of the II Corps in North Army. He assisted in the bombardment of Kukus on the 30th of June and took part in the battle of Königgrätz on the 3rd of July during II Corps engagement in the Swiepwald. During the following withdrawal from Olmütz to Pressburg he was promoted to Feldmarschall-Lieutenant on the 16th of July. Following the cessation of hostilities, Freiherr von Philippović was awarded the Kaiser's commendation on the 3rd of October 1866. He had in the meantime been appointed as commanding general of the 1st Infantry Division at Vienna on the 6th of September and was honored with the appointment as Oberstinhaber (regimental colonel) of the 35th Infantry Regiment on the 5th of December 1867. On the 18th of January 1870 he was appointed as commanding general of the VIII Infantry Division at Innsbruck with the dual responsibility as defence commander for the Tyrol and Vorarlberg. Promoted to Feldzeugmeister on the 28th January 1874 he was simultaneously appointed as the commanding general in Brünn and shortly thereafter was reassigned as the commanding general in Prague on the 14th of June 1874.

In 1878 he was selected to command the forces for the occupation of Bosnia and Hercegovina was appointed on the 3rd of July as the commanding general of the XIII Corps which was deployed for this purpose. Following the capture of Sarajevo on the 19th of August, FZM Freiherr von Philippović assumed command of the newly formed 2nd Army and completed the occupation of the Hercegovina by the 19th of October 1878. With the successful conclusion of the operation he was made a Commander of the Military Order of Maria Theresia at the 170th Promotion on the 2nd of May 1879.With the dissolution of the 2nd Army on the 18th of November 1878 he again took up the appointment of the commanding general in Prague. On the 6th of April 1881 he was appointed as commanding general in Vienna however at his request he returned once again as commanding general in Prague on the 8th of April 1882. He remained in this position until he died on the 6th of August 1889.