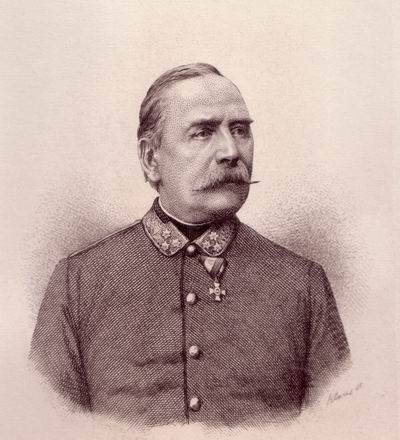 Bruno Freiherr von Montluisant was born in 1815 at Enzersdorf in as the son of an officer. Following a military education in the Regimental boys' school of the 49th Infantry Regiment he was assigned to the 12th Infantry Regiment as a Regimental Cadet. On he was transferred to the Tyrolean Kaiserjäger Regiment in which he would spend the rest of his career. Commissioned as an Unterlieutenant on at the age of 19, he was promoted to Oberlieutenant on in which rank he went to war against in 1848.

During the 1848 campaign he saw action at Pastrengo from the 28th to the 30th of April, at Curtatone on the 29th of May, the occupation of on the 10th of June, at Sona and Sommacampagna on the 23rd of July, at Salionze on the 24th of July and at Custozza on the 25th of July. On the 4th of August he participated in the encounter battle at and finally in the engagements at and Verceja on the 28th of October. During 1849 campaign he was involved in the skirmish at on the 23rd of March and was promoted to Hauptmann on the 1st of April.

Promoted to Major on Freiherr von Montluisant was given command of the 6th Battalion of his regiment in which he participated in the war against and and fought at the battles of Magenta on the 4th of July and at Solferino on . For his conduct during that campaign he was awarded the Order of the Iron Crown 3rd Class.[1] Having been promoted to Oberstlieutenant on and to Oberst on he was to be given command of a half-brigade in the defence of the in June 1866.[2] The Austrian forces in the under the command of Generalmajor Franz Freiherr von Kuhn were primarily engaged against the red-shirted volunteers of the Italian revolutionary General Giuseppe Garibaldi. Baron Montluisant commanded his half-brigade with distinction at the encounter of Cimego on the 16th of July and the battle at Bezzecca on the 21st of July 1866 and it would be for the latter action that he would earn the Knights Cross of the Military Order of Maria Theresia.

Although Archduke Albrechts army had been victorious at the battle of Custozza on the 24th of June, following the defeat of North Army in , South Army had had to be transferred north from to the to defend the Austrian capital. This left just Generalmajor Kuhns limited forces to protect the against Garibaldis volunteers, initially in the Guidicarie Alps between and to the north of Lakes Garda and Iseo. Garibaldis first actions in the had resulted in disappointment and severe casualties at the hands of Kuhns disciplined riflemen at amongst other places Ponte di Caffaro on the 25th of June, Monte Suello on the 3rd of July and Vezza on the 4th of July.[3] After these early reverses, Garibaldi once again went on the offensive threatening the Ampola and Ledro valleys. 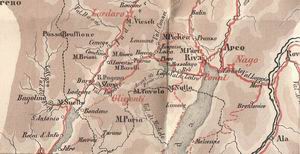 In order to attempt to counter the Italian moves, Oberst Freiherr von Montluisants half brigade with a strength of about 2600 men, 4 three pounder cannon and eight rocket guns was ordered to the Ledro Valley on the 19th of July. He was on the 21st of July in conjunction with the half brigade of Major Graf Grünne to advance towards the besieged fortified blockhouse of .[4] The enemy with a strength of around 10000 men were now in position in the Ledro and Concei valleys with the good road to Rocca dAnfo from which ammunition and supplies could be rapidly received. In order to make contact with the enemy, Baron Montluisants half brigade had to ascend and cross from the a 6000 foot mountain. This in itself prevented any re-supply of ammunition and limited his withdrawal options. Despite the numerical superiority of the enemy Montluisant decided to proceed and on the 21st with his forces divided into two main and ons subsidiary columns set off south over the mountainous terrain at 4 in the morning in the direction of the

Major Graf Grünnes force arrived first at Lenzumo and expelled the enemy. Pressing on to Enguiso they met the head of Major von Krynickis column and pulled back. The rocket batteries were deployed east of Enguiso and the mountain battery took up positions on the road and commenced fire on the enemy positions which extended from the heights east of Locca to the church at Bezzecca. Following the artillery preparation, Major Graf Grünne with three companies of Kaiserjäger, two companies of Infantry Regiment 14 and the Landesschützen assaulted the enemy gun positions on the hill between Locca and Bezzecca. In the meantime two companies of Kaiserjäger of Krynickis column assaulted from the west and in so doing the Locca church position was taken and after further hard fighting over 500 men of the 5th Volunteer Regiment were captured including its mortally wounded commander Colonello Chiassi.

Baron Montluisant now had his force assault Bezzecca where the enemy, nine battalions strong were in position. Following an artillery preparation, Grünnes column assaulted the north side of the town while two companies of Krynickis Kaiserjäger were sent to the crevasse just north of the town. The town was rapidly taken as were around another 500 prisoners.

As Baron Montluisant now with some certainty assumed that in the area between Tione and Ampola around 12  15000 enemy were in place he decided to break off the action at 1130 hours. Unmolested by the enemy he withdrew with his wounded and prisoners back across Monte Pichea. The Austrian losses sustained in the operation were 6 dead officers and 19 soldiers, 7 wounded officers and 75 soldiers. The enemy losses were around 100 dead including Colonello Chiassi, 250 wounded and over 1100 prisoners including 2 field officers and 17 other officers.[5] Such are the quirks of history that the Italians claimed Bezzecca as a victory!

Following the operation at Bezzecca Generalmajor Kuhn withdrew the majority of his forces east of the River Etsch/Adige to meet the threat of General dicis division in the . For his conduct of operations in the , Oberst Freiherr von Montluisant was awarded the Knights Cross of the Military Maria Theresia Order at the 166th Promotion on . With the cessation of hostilities, the Baron resumed command of his battalion and then the entire regiment in 1868. On he retired with the brevet rank of Generalmajor and died on in .

[3] Montliusants temporary replacement as the commander of the 6th Battalion TJR, Hauptmann Ludwig Freiherr von Gredler was awarded the Knights Cross of the Military Order of Maria Theresia for his success against the greatly superior force of Garibaldini at Monte Suello.

[4] The blockhouse of commanded by Oberlieutenant Anton von Preu of Infantry Regiment 11 had already capitulated to the Garibaldini on the 19th of July.