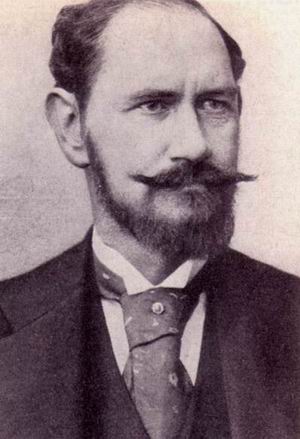 Ferdinand Mannlicher was born on the 30th of January 1848 in Mainz (Germany). His father, a military official (k.k. Ober-Feldkriegskommissär) who originated from Brüx (Bohemia) was garrisoned at the federal fortress there at this time. In 1857 Mannlicher went to Vienna where he studied Maschinenbau (engineering) at the Technical University. In 1869 he was employed at the k.k. Südbahngesellschaft (Southern Railway Company) and after a short time with the state railway company he again moved to a private railway company, the k.k. Kaiser-Ferdinand-Nordbahngesellschaft, where he was employed in their construction department and finally attained the title of Oberingenieur or senior engineer. However, for the talented technical constructor this job was rather boring and he started to think about early retirement when he got in touch with Josef Werndl in 1875 who encouraged him to develop a magazine fed rifle and finally offered him a job as a constructor at the OEWG in 1878. Ferdinand Mannlicher hesitated until 1886 before finally he left his secure job to join Werndl. During the visit of the Centennial exhibition in the USA in 1876 Ing. Mannlicher had the chance to study several plans and models for small arms at the Patent office of Philadelphia for some days, possibly a valuable inspiration for his first rifle model which was offered to the k.k. technical administration military committee in 1879.

During the following years Ing. Ferdinand Mannlicher developed and improved numerous rifles, pistols and magazine designs for Werndl's  company. Together with Otto Schönauer he also developed a successful rotary system for rifles which was patented in 1900 which became well known as Mannlicher/Schönauer System. The hunting models of this rifle were successfully produced from 1903 to 1972! His first semi-automatic rifle design appeared  in 1885 and his automatic pistol achieved great success yet he is most remembered for the bolt action rifles that bear his name. His pistols became very popular, although not issued to the Austrian Army they were privately bought my many officers and adopted in many armies from Argentina to South Africa. Mannlicher's rifles, which uniquely allowed the loading a box magazine in one motion first produced first in 11mm and since 1888 in 8mm calibre, were adopted by the Austrian Army in 1886 to replace the Werndl rifles (last updated as M.1895), in the German Army as M/88 and in the armies of Italy, Romania, Portugal, Switzerland, Bulgaria, the Netherlands and France (as Karabiner Berthier) as well as in several states outside Europe, for instance the first "practical" test of his semi-automatics was the civil war in Chile in 1890!

In 1887 Ferdinand Mannlicher was honored with the award of the 3rd class of the Order of the Iron Crown followed by his ennobling with the predicate of "Ritter von" on the 1st of June 1892 - diploma issued on the 14th of December 1892. His interest in several political questions was crowned with his appointment as a lifelong member of the Österreichisches Herrnhaus (Austrian Upper House) in 1899. An assortment of his small arms were awarded the first prize at the World Fair in Paris in 1900. On the 20th of January 1904 Ferdinand Ritter von Mannlicher, probably the most successful firearm constructor of all times, died suddenly at the early age of 55 in Vienna.