Moritz Ritter von Lehmann was born at Zloczůw (Galicia) on the 15th of June 1836. As the son of a senior officer is was no question that he and his younger brother Otto decided upon an officers' career. After finishing the Theresian Military Academy at Wiener Neustadt he was commissioned as an Unterleutnant in the 1st ulan regiment on the 15th of June 1854 shortly followed by his promotion to Leutnant on the 1st February 1855 and to Oberleutnant on the 1st of December of the same year. During the campaign of 1859 in Italy he was promoted to Rittmeister 2nd class (28th May 1859) and received his baptism of fire in the battles of Magenta and Solferino. For his outstanding achievement near Orfengo - he protected the retreat of the half brigade Wiedmann - he was honoured with the award of the military merit cross with war decoration on the 17th of December 1859. On the 1st of March 1860 he was transferred to the 4th division of the 1. Freiwilligen Ulanen Regiment but when it was disbanded on the1st of September 1862 he returned to ulan regiment number 1 in which his younger brother Otto was now also on duty as an Oberleutnant. On the 1st of June 1864 he took over command of the 5th squadron.

During the campaign of 1866 Rittmeister Moritz Ritter von Lehmann was with the northern army. On the 27th of June 1866 his squadron formed the extreme left wing of the troops of Oberst Ziegler who were to protect the city of Cracůw. At 6 o'clock in the morning he received the message that a much superior Prussian formation was nearing and a Prussian ulan regiment was riding towards the Sola bridge. Rittmeister Moritz Ritter von Lehmann, who was at this moment in the railway station of Oswiecim, realised that this would not only be dangerous for the city but he also noticed  rightly that the Prussian ulan regiment would cut off a large number of Austrian troop from their lines of withdrawal. The only possibility to avoid this possibility was to delay the Prussian ulans for as long as possible. He took his squadron and 2 ZŁge (troops) of Rittmeister Baron Bertoletti's  4th squadron who were fortuitously in his area and decided to attack the 4 squadrons strong Prussian 2nd Landwehr ulan regiment immediately. He spoke some heroic words about Kaiser and fatherland to his men and than commenced the attack riding far in front of  his men. The Prussian ulans were surprised and could not suspect that such a small group would attack their whole regiment and did immediately react. Rittmeister Ritter von Lehmann found the commander of the Prussian regiment, Major von Busse, riding straight towards him, stopped, saluted and introduced himself by telling his name and rank and with one hard hit of his sabre felled him immediately with a wound to his shoulder. When the surrounding Prussians saw their commander falling they overcame their shock and the heroic Rittmeister Moritz Ritter von Lehmann was pierced by half a dozen lances. At this moment the Austrian ulans struck the enemy and fighting like lions they were able to delay the Prussian regiment for the necessary time 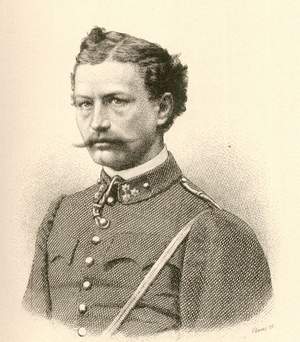 In the evening of the same day a Prussian parliamentary reported himself to the Austrian command bringing a letter from the German commander which expressed his congratulations for this outstanding bravery which contained the merit cross and a medallion (containing the picture of Lehmann's young wife ( he had married only some months previously) which was found by his dead body on the battlefield. EscortPage When the heroic death of the commander of the 5th squadron was brought to the Kaiser's attention, Ritter von Lehmann was immediately honored by the posthumous award of the order of the Iron Crown 3rd class with war decoration on the 5th July 1866. At the proposal of all the officers of the 1st ulan regiment he was further honored by the award of the knight's cross of the Militšr Maria Theresien Orden on the 29th of August 1866 again directly by the Kaiser. On the 23rd of April 1868 it was decided that his widow Olinde, his daughter Marizia and his brother Otto, who was still an officer in the regiment, should also receive the late captain's posthumous ennobling to "Freiherr von" and an Obelisk was built at the battlefield honoring him and all his men who were killed during this fight on the 27th of June 1866.

The two official histories of the campaign have slightly conflicting figures for casualties suffered at Oswiecim. The Austrian history gives: