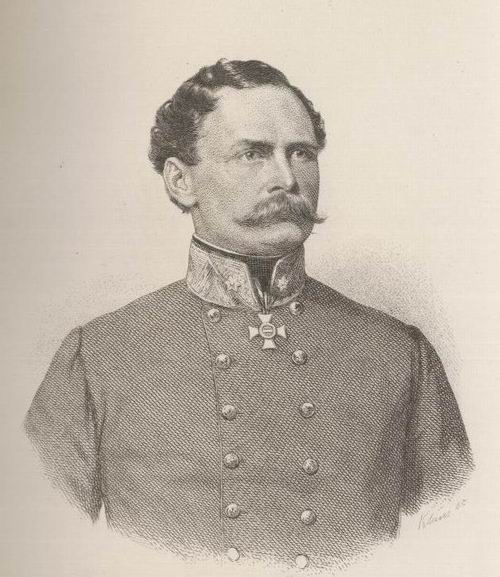 Franz John was born in Bruck an der Leitha in lower Austria on the 20th of November 1815 as the son a sapper officer and enjoyed a military education at the imperial and royal military academy at Wiener Neustadt which started on the 27th of October 1827 and where he was always one of the more successful students among his contemporaries. Commissioned on the 24th of October 1835 as a Lieutenant he was assigned to Infantry Regiment Erherzog Franz Carl Number 52 in Italy. Following four years at regimental duty he was attached to the General-Quartermaster-Staff where he was finally fully accepted on the 19th of June 1845 and promoted to Oberlieutenant the next day. He was further promoted to Hauptmann on the 13th of March 1848. He participated as a general staff captain in the war against Piedmont in 1848/1849 initially at army headquarters seeing action in the street fighting during the uprising in Milan on the 20th and 21st of March 1848, in the battle of S. Lucia on the 6th of May, the assault on Montanara on the 29th of May and the engagement at Goito on the 30th of May. From the 7th of May he was assigned as the general staff officer to the brigade of Generalmajor Friedrich Fürst Liechtenstein where he took part in the capture of Vicenza on the 10th of June , in the battle of Sommacampagna and Sona on the 23rd of July as well as the battle of Custozza on the 25th of July. During the latter battle, when his brigade was in danger of being outflanked by the enemy, his prompt action in changing the direction of the brigade's front resulted not only in alleviating the danger but enabled the brigade to force the enemy's withdrawal. He further personally supervised the positioning of the brigade's attached artillery battery under heavy enemy fire which subsequently successfully compelled the Piedmontese artillery to vacate their firing positions. For his outstanding conduct in the battle of Custozza, Hauptmann John was consequently awarded the Order of the Iron Crown 3rd Class. The following day he again distinguished himself through his extraordinary bravery during the night battle at Volta which followed the pursuit of the enemy consequent to their defeat at Custozza. Amongst other feats during the night he successfully held the endangered left flank of the division until reinforcements arrived. As a consequence of his conduct during the night of 26th/27th July, Kaiser Franz I as the Grandmaster of the Order of the Military Order of Maria Theresia awarded Hauptmann John the Knights' Cross  of the order at the 157th promotion on the 26th of March 1850 and he was subsequently raised to an Austrian Barony taking the title Freiherr von John. He saw further action during the war of 1848 including the engagement at Cremona on the 30th of July and at Milan on the 4th of August. With the recommencement of the war the following year he took part in the engagement at Gravellone  on the 20th of March and the battle of Mortara on the 21st of March, Novara on the 23rd of March with further campaigning during the expedition into Tuscany and the assault at Livorno on the 10th and 11th of May 1849. His final service during the campaign of 1849 was the pursuit of Garibaldi's irregulars in Romagna until August. He was further awarded an imperial commendation on 24th of May 1848 and the Military Merit Cross on the 4th of February 1850 for his services during 1849. He was additionally awarded the Commanders' Cross of the Papal Saint Sylvester Order on the 26th of September 1849. 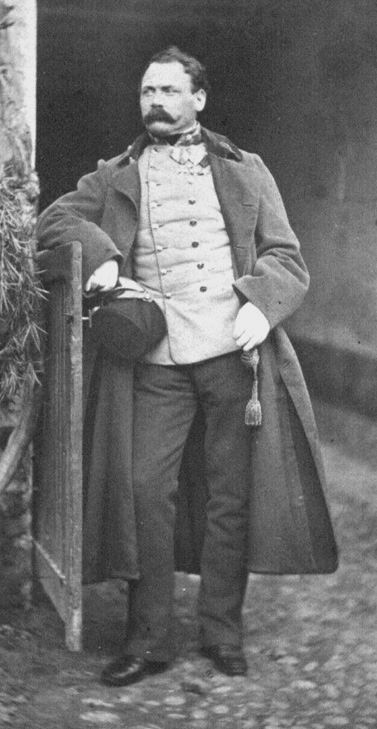 Following the conclusion of the war against Piedmont he was promoted to Major on the 24th of October 1849 as was appointed as the chief of staff of the occupation troops in Tuscany.  In August 1852 he was assigned as the chief of staff of the VII Corps in Bologna with promotion to Oberstlieutenant  on the 23rd of March 1854. On the 16th of April 1857 he was promoted to Oberst and given command of the 1st Infantry Regiment Kaiser Franz Joseph at Verona which he initially lead in the war of 1859 against France and Piedmont. From Vicelli he successfully lead a half brigade at Dora baltea which covered the extreme right flank of the army and participated in a reconnaissance of that position that determined the area's unsuitability as a deployment area for the army. Oberst Freiherr von John was however soon recalled to general staff duty and on the 5th of May 1859 appointed as chief of staff of the VI Corps which was designated for service in the Tyrol. Only one brigade of the corps saw action at the battle of Solferino. Following the war of 1859 he was transferred as the chief of staff of the II Army in Verona followed by the same appointment in the army headquarters for Northern Italy until 1866 in which he was given an accelerated promotion to Generalmajor on the 19th December 1861. With the outbreak of war against both Prussia and Italy in 1866, Freiherr von John became the chief of staff of Archduke Albrecht's Südarmee and was instrumental in formulating the decisive victory over the Italian forces under the command of General Alfonso La Marmora at the 2nd battle of Custozza on the 24th June 1866. The three corps of Südarmee were able to throw back the Italian army across the Mincio river but the outcome of the war was decided at the  battle of Königgrätz hundreds of miles to the North in Bohemia where the Austrian Nordarmee of Feldzeugmeister Ludwig Ritter von Benedek was comprehensively defeated by the Prussian army on 3rd July. Promoted Feldmarschalleutnant the day after the battle of Custozza, he was awarded the Commander's Cross of the Military Order of Maria Theresia at the 166th promotion on the 29th of August 1866. With the defeat of Königgrätz both Erzherzog Albrecht and Freiherr von John were moved North to assume the appointments of commander and chief of staff respectively on 10thn July of the supreme command of all Austria's operational forces but saw little further action. With end of hostilities Feldmarschalleutnant von John was appointed as the army's chief of staff on the 6th of September 1866 in which alongside Erzherzog Albrecht he put into action the much needed reform of the Austrian army following the catastrophe of Königggrätz. Simultaneously entrusted with running the war ministry he was also confirmed in that appointment on the 30th of October 1866 and appointed a privy councilor on the same day. He was further honored with his appointment as the colonel or Inhaber of Infantry Regiment Nr.76 on the 4th of December 1866.

On the 5th of May 1867 he was made a life long member of the house of lords of the Austrian parliament and following the creation of the new Austro-Hungarian monarchy he became the Reich's war minister. At his own request he was relieved of this post on the 18th of January 1868 and simultaneously awarded the Grand Cross of the Order of Leopold. Just over a year later on the 27th of March 1869, he stepped down as chief of staff of the army and was appointed as the commanding general in Graz where he was promoted to Feldzeugmeister on the 23rd of April 1873. 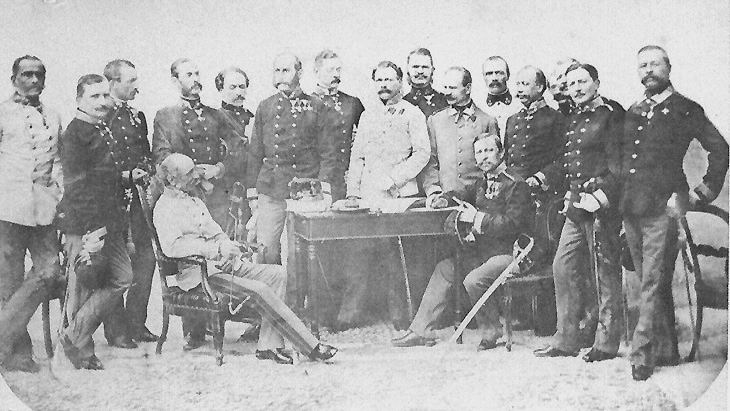 Recalled once again to the position of army chief of staff on the 14th of July 1874 the extremely capable and talented Franz Freiherr von John died suddenly on the 25th of May 1876. At the express command of Kaiser Franz Joseph he was buried with full military honours in Vienna. During his long and successful career he had also been awarded many foreign decorations and awards including the Knight's Cross of the Grand Duke of Tuscany's Saint Josephs' Order on the 16th of October 1852, the Commander's Cross of the Papal Order of Saint Gregory on the 20th of March 1857, the Grand Cross of the Royal Saxon Albrecht's Order with War Decoration on the 14th of November 1866 and finally the Grand Cross of the Royal Italian Mauritius and Lazarus Order on the 28th of July 1867.