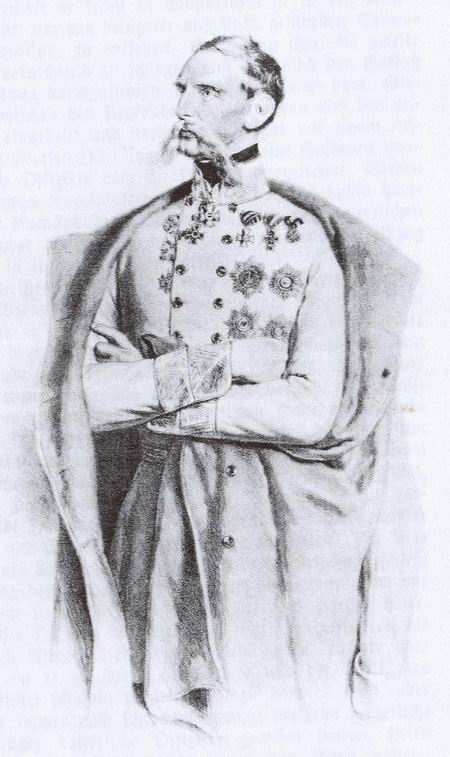 Julius Jacob Heinrich Friedrich Ludwig Freiherr von Haynau was born at Kassel on October 14 1786 as the illegitimate son of Landgrave Wilhelm IX (later Elector Wilhelm I.) of Hesse-Cassel and Rosa Ritter von Lindenthal. He was described as taking much after his father, being very courageous, rough humoured, stubborn, extremely developed military skills, a born soldier with Herrenstolz and a great sense of self-respect. Some people even compared him in the 1850s to the famous Prussian General Fürst Blücher von Wahlstatt and it was said that next to Radetzky, he was the most talented officer of his time. After studying at Marburg, he entered the Austrian army as a Lieutenant in Infanterie-Regiment Brechainville in 1801. His Regiment was at the fortress of Ulm at the time of its capitulation in 1805. Following the peace of Pressburg he was repatriated and promoted to Capitän-Lieutenant in Infanterie-Regiment Argenteau and again saw action in the 1809 campaign. In the mean time he had married Theresia Weber v. Treuenfels, daughter of a Feldmarschalleutnant. The couple had one child, the Freiin Clotilde v. Haynau. In 1809 he was promoted Hauptmann and in 1810 transferred to Infanterie-Regiment Vogelsang. 1813 saw his promotion to Major and a transfer to the German legion where he saw service in Northern Italy where he particularly distinguished himself.

Following Napoleon's return from exile, von Haynau's battalion was attached to the Army of Rhine in Feldzeugmeister Graf Colloredos' corps and entered France. After the second peace of Paris, as the German Legion was dissolved, Julius Freiherr v. Haynau was transferred to Infanterie-Regiment Reuß-Greiz and then as the senior Major to Infanterie-Regiment Lusignan. His promotions to Oberst-Lieutenant followed in 1823 and to Oberst in 1830. Five years later he was promoted to Generalmajor and assigned as a Brigade commander in Italy. The year 1844 brought his promotion to Feldmarschalleutnant and a divisional command and the associated command of the city of Graz. The next year, he was honoured by being made Oberst-Inhaber of Infanterie-Regiment 57. However, Generalmajor Freiherr v, Haynau found himself, mostly due to his enduring conflict with the local authorities and his superiors at Graz, transferred to Temesvár in the Banat in 1847.

During the years of the revolution, 1848/49 Feldmarschalleutnant Julius Freiherr von Haynau proved to be a loyalist and a conservative monarchist. The Kaiser could completely rely on his service, and made use of these services as Commander of Verona and at the Battle of Custozza, in which he played a decisive role. The most significant and remembered action of the Feldmarschalleutnant, however, was at the city of Brescia. The revolutionaries in this Italian city had massacred invalid Austrian soldiers in the local hospital, and this provocation had to be repressed. Feldmarschalleutnant Freiherr von Haynau showed no mercy and 12 men were executed. This incident was soon became known throughout the World and for his bloody campaign, von Haynau was called the Hyena of Brescia. He was transferred to Venice, and shortly afterwards promoted to Feldzeugmeister on the 30th of May 1849 and appointed a Privy Councillor. He was subsequently given the supreme command over the army in Hungary of which he led to victory against the insurgent Hungarians. The victories at Raab and Komorn in June and July of the same year, the actions at Szegedin on August 3rd, at the Theiß on August 9th which ensured the capitulation of Temesvár were all personal victories of Feldzeugmeister Julius Freiherr von Haynau. The campaign here again was very bloody.

Special thanks to David Müldner for providing much of the history and the illustration of this officer.