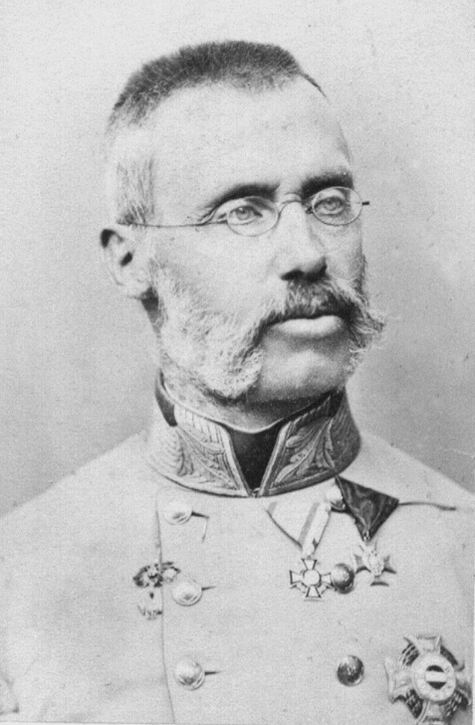 Archduke Albrecht Friedrich Rudolf was born on the 3rd of August 1817 as the son of the famous Austrian field marshal and victor at the battle of Aspern, Archduke Carl and Princess Henritte of Nassau-Weilburg. From his earliest years the young Archduke commenced a military education and already at the age of 13 he was appointed as the Inhaber or regimental colonel of the 44th line infantry regiment. On the 17th of May 1837 he was assigned as a battalion commander in the 13th line infantry regiment followed by his assignment to the 4th Cuirassier regiment on the 1st of March 1839. Promoted to Generalmajor in 1840 he was appointed to the brigade command at Graz on the 11th of September 1840 and on the 11th of August 1843 he was promoted to Feldmarschall-Lieutenant and appointed as the commanding general of the Moravian-Silesian General Command. On the 1st of May 1844 he married the third daughter of the Bavarian King Ludwig I., Hildegard, who died on the 2nd of April 1864 at the age of only 39. They had 3 children, their only son, Carl Albrecht, died as an infant in 1848 and their youngest daughter, Mathilde, died during a fire on the 6th of June 1867. Only their eldest daughter, Maria Theresia Anna, survived to adulthood and married the Herzog Philipp of Württemberg on the 7th of January 1865. On the 15th of December 1844 he was transferred as the commanding general in Lower and Upper Austria and also of Salzburg. In the war against Piedmont in 1848 he initially saw service at the headquarters of field marshal Radetzky and participated in the battle of Saint Lucia on the 6th of May. In October he was appointed as a divisional commander in General d'Aspre's II corps which he led the following year during the continued fighting in northern Italy. The Archduke led his division during the crossing of the river Ticino at Pavia, the small encounter at Gravellone on the 20th of March and the assault at Mortara on the following day. Two days later he again led his division into action at the battle of Novara for which his actions earned him the award of the Commander's Cross of the Military Maria Theresia Order at the 153rd promotion on the 29th of June 1849. He was additionally awarded the Military Merit Cross for his service in the campaigns of 1848/49.

On the 11th of October 1849 he was appointed commander of the federal fortress at Mainz however only five days later he was switched to the command of the III corps in Bohemia with a further appointment as military commander in Prague on the 11th of March 1850. He was promoted to General der Cavallerie on the 14th of September 1850. The 12th of September of the following year brought his appointment as commanding general of the III army and the simultaneous post as both the military and civil governor of the Kingdom of Hungary. Awarded the Grand Cross of the Order of Saint Stephen on the13th of July 1852, he led his army into the Siebenbürgen and the Bukovina in 1854. He held the III army command for some nine years. Although provisionally selected for an active federal command in the case of the German Federation becoming involved during the war against France in 1859, he did not participate in the conflict and remained at his post as the commanding general in Hungary until at his own request he was relieved of that appointment on the 19th of April 1860. During the summer of 1860 he was employed as an inspector-general in various parts of the monarchy until appointed again at his own request to field command. He was appointed commanding general of the VIII corps in Italy which he led for two years. Promoted to field marshal on the 4th of April 1863 he headed a commission on army reform and again acted as an inspector-general. 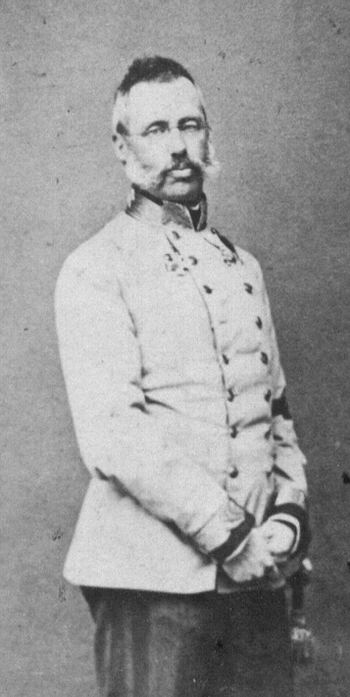 With the outbreak of the war against Prussia and Italy in 1866, Feldmarschall Archduke Albrecht assumed command of the monarchy's "South Army" facing the Italians on the 9th of May whilst the former chief of staff and commander in northern Italy, Feldzeugmeister Ludwig Ritter von Benedek was appointed to command the "North Army" in Bohemia. Archduke Albrecht's relatively small force of some 70,000 men and 168 guns was concentrated in the area of the "Quadrilateral" forts on the left bank of the middle Etsch river and consisted of three under strength corps each of just three brigades. At this time the Austrian army had dispensed with divisional headquarters and the individual brigades were directly subordinated to their respective corps commander. Ably assisted by his competent chief of staff, Feldmarschall-Lieutenant Franz Freiherr von John, the Archduke was to lead Südarmee in the hard fought 2nd battle of Custozza on the 24th of June 1866 against the numerically superior Italian Mincio Army under General Alfonso La Marmora. Following the Italian crossing of the Mincio river on the 23rd of June, the complicated and rather confused battle took place the following day. After a somewhat shaky start, the Austrians eventually took Monte Vento and Santa Lucia and once Monte Croce was taken, the Italians were forced to retreat back across the Mincio in some disorder. Unfortunately for the Austrian cause FZM Benedek's force in Bohemia was comprehensively defeated in Bohemia culminating in the battle at Königgrätz and Austria was in fact compelled to cede most of it's northern Italian possessions despite it's victory in the south. Albrecht was summoned to assume command of all the forces of the monarchy on the 10th of July and accompanied by FML Freiherr von John he reported to Vienna on the 13th. Following the conclusion of peace he was appointed army commander in chief on the 15th of January 1868 and the general inspector of the Imperial and Royal Army on the 24th March 1869

For his accomplishments on the Mincio Archduke Albrecht was awarded the Grand Cross of the the Military Maria Theresia Order at the 164th promotion on the 29th of August 1866. The commander of his VII corps, Feldmarschall-Lieutenant. Joseph Freiherr Maroičić di Madonna del Monte and Freiherr von John, the chief of staff were both awarded Commander's Crosses with Knight's Crosses going to Gabriel Freiherr von Rodich of V corps, Ernst Hartung of XI corps, the brigade commanders Eugen Freiherr Piret de Bihain and Ludwig Pulz, IX corps chief of staff Ludwig Ritter von Pielsticker and Rittmeister Anton Freiherr von Bechtolsheim of the12th Uhlans.

At his post as inspector general Archduke Albrecht put into effect the much needed reforms necessary after the defeats in Bohemia. He would remain in this post for nearly twenty six years until his death on the 18th of  February 1895 . He was appointed Oberst-Inhaber of the 5th Dragoons on the 25th of November 1875 which he remained until the 13th of May 1888. He was appointed Inhaber of the 5th corps artillery regiment on 25th of April 1887 which coincided with his sixtieth year of military service. Feldmarschall Erzherzog Albrecht von Österreich was the last serving Austrian officer to hold the rank of field marshal until his adoptive son Erzherzog Friedrich was promoted to that rank on the 8th of December 1914.