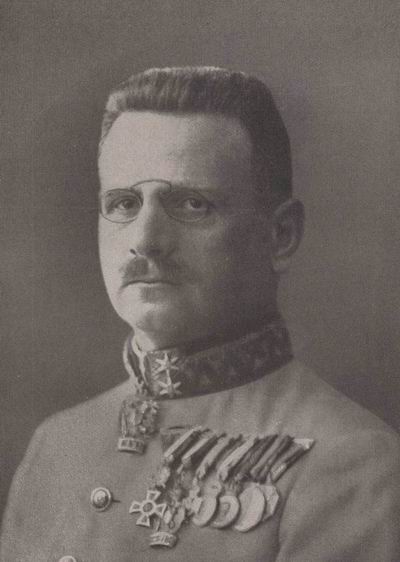 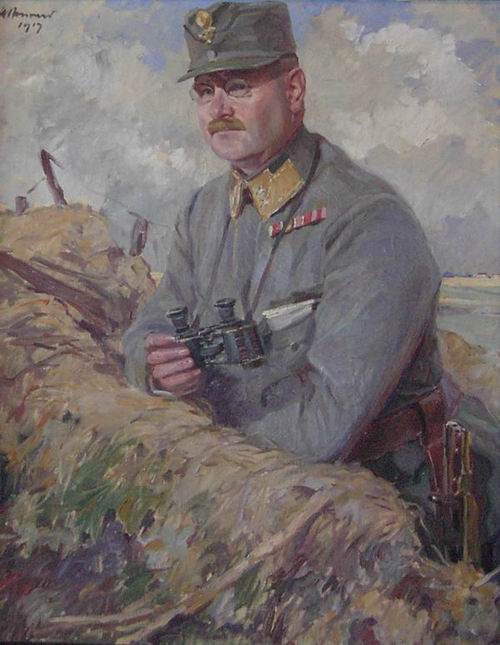 Karl Freiherr von dem Bussche-Ippenburg was born on 1 December 1872 at Orsova in Hungary as the son of the Post and Telegraph Inspector in Fiume, Alfons Clamor Freiherr von dem Bussche-Ippenburg¹ and Juliane née von Hundt. Descended from a widely branched Hannoverian noble family, he commenced his military education at the military preparatory schools in Eisenstadt and Mährisch-Weisskirchen followed by attendance at the Theresia Military Academy at Wiener-Neustadt. He graduated as a Leutnant in Feldjägerbataillon Nr. 11 on 18 August 1893 in which he served with just a short interlude as an instructor at the Infantry Cadet School at Lobzów near Craców until 1905. He married Carolina Wrchovszky de Wrchovina at Ödenburg on 16 June 1898. For his accomplished service during this period he was awarded the Bronze Military Merit Medal².

In 1905 he was transferred to Feldjägerbataillon Nr. 24 and on 1 September 1907 to the Infantry Cadet School in Budapest as an instructor and company commander where he remained until 1912. He was promoted to Oberleutnant on 1 November 1897 and to Hauptmann on 1 May 1908. In 1912 Baron Bussche was assigned as a company commander in the Rovereto based Tiroler Kaiserjägerregiment Nr. 3 and it was as the commander of TJR 3's 5th company that the Baron entered WW1 on mobilisation in August 1914.

TJR 3 was initially deployed to the Galician front as a component of 96. Infanterie-Brigade of 8. Infanterie-Truppen-Division of Erzherzog Josef Ferdinand's XIV. Armeekorps where it participated in the battle of Lemberg. 5./TJR 3 received its baptism of fire in the battle of Korczmin on 28 August and on that same day, Baron Bussche had to assume command of the battalion (II./TJR 3) following the death in action of the battalion commander, Major Franz Bauer.

Hauptmann Baron Bussche led the battalion in the battles at Telatyn in late August and early September until wounded on 7 September when he was temporarily replaced by Hauptmann Josef Kschwend. TJR 3's casualties at Telatyn were high: 50 dead, 200 wounded and 300 missing in action³. For his conduct in these early engagements, Baron Bussche was awarded the Military Merit Cross 3rd Class with War Decoration. The Baron returned to duty within a few days and led the battalion throughout the winter and spring of 1914/15. His continued leadership of his unit was rewarded with the award of the Order of the Iron Crown 3rd Class with War Decoration and the recommendation for accelerated promotion to Major. He remained with II./TJR 3 until early April when due to sickness he was replaced by Hauptmann Hugo Fleischner.

Hauptmann Baron Bussche was appointed as commander of Feldjägerbataillon Nr. 10 on 11 June 1915 replacing Oberst Oswald Eccher ab Echo Edler von Marienberg on his appointment as commander of Infantry Regiment Freiherr von Bolfras Number 84. As the Baron did not actually join his new command until 28 July, the battalion was temporarily commanded by Hauptmann Karl Müller. Promoted to Major on 1 July 1915, at the time of his arrival, Feldjägerbataillon Nr. 10 was in defensive positions at the Sokal bridgehead on the River Bug. In command for barely two weeks, he was badly wounded on 15 August but remained with his command until evacuated in the early hours of the 17th. Major Baron Bussche would not return to the battalion until after his recovery on 30 November 1915. During his absence, the battalion was once again commanded by Hauptmann Müller. Following his resumption of command at Dubno on the River Ikwa, he would remain with the battalion until the wars end.

For his conduct during the summer battles of 1916 he was awarded the Knight's Cross of the Order of Leopold4  and on 30 June 1917, in appreciation of his first rate service and gallant conduct before the enemy he received an accelerated promotion to the rank of Oberstleutnant. On 25 April 1918 he was awarded the Bronze Military Merit Medal on the ribbon of the Military Merit Cross and in 1918 assumed command of a Jägergruppe (group) within 25. Infanterie-Division consisting of  FJB Nr. 5, FJB Nr 6 and his own FJB Nr. 10. With this group he fought with considerable skill on the Piave in late October/early November and covered the withdrawal of II. Armeekorps from the Piave sector at the wars end that followed. During the collapse of the old Empire, Baron Bussche led FJB Nr. 10 back to Austria and there assumed the military command in St. Pölten and the subsequent demobilisation of his battalion.

In the Spring of 1919 he was assigned the task of the disbanding of Tiroler Kaiserjägerregiment Nr. 3 in Bregenz and in December of that year he was awarded the Order of the Iron Crown 3rd Class with War Decoration and Swords for his leadership on the Piave the previous year. Promoted to Oberst in 1920 he formed and commanded the Selbständiges Alpenjägerbataillon Vorarlberg Nr. 4 from 26 July 1920 to 31 October 19225. Following his battalion's participation in the incorporation of the Burgenland into Austria he retired on 1 November 1922. He was promoted to the Titular (brevet) rank of Generalmajor on 30 April 1925.