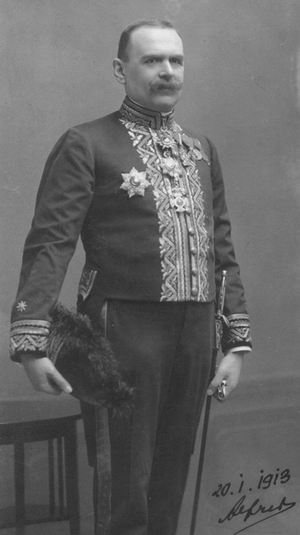 Alfred Rappaport was born in Vienna on the 16th of June 1868. After attending the Orientalische Akademie at Vienna he was ideally educated for service with the Ministry of Foreign Affairs. He successfully passed the examination for consular students on the 16th of July 1891 and was attached to the district court at Trieste for legal training. On the 4th of November 1892 he was appointed as a consular student in receipt of full payment. In March 1893 he was transferred to the Consul General at Scutari where he received his promotion to Vice Consul on the 25th of October 1895. On the 19th of April 1897 he was appointed Chief of the Vizekonsulat at Prisren where he received the knight's badge of the Order of Franz Joseph on the 30th of November 1898. In February 1900 he received the provisional rank of Consul and was appointed leader of the newly created Consulate at Baghdad where he received his substantive promotion to Consul on the 24th of November 1903. On the 1st of January 1904 he was transferred to Macedonia.

During the following years Alfred Rappaport alternated as interim chief between the consulates of Macedonia, Üsküb and Canea with some travel through the southern Balkan countries, especially Albania. His efforts were recognized by the award of the Order of the Iron Crown 3rd class on the 22nd of February 1907 and the provisional title of Consul General 2nd class on the 1st of April 1908. He also received various foreign awards like the commander's badge with star of the Ottoman Medschidie Order, the 2nd class of the Ottoman Osmanie Order and the 3rd class of the Order of Danilo of Montenegro. On the 27th of November 1909 he was summoned for service with the Ministry for Foreign Affairs where he received his substantive promotion to Consul General 2nd class on the 20th of March 1910. During his "wild years" with the foreign service he had fallen in love with Theresia Julia Anelli. Although unmarried they had two daughters, Maria Immakulata Stephanie, born on the 18th of November 1905 in Vienna, and Maria Josefine Charlotte, born on the 31st of October 1907 in Salonika, commonly called Charlotte. Now at his new post at the ministry it was without question that such circumstances would not tolerated and so they were married on the 19th of November 1909 before they left Salonika to settle in Vienna. He retrospectively legitimized his two children. At the ministry he was the departmental chief for Albania and deputy chief of the oriental department. When in 1912 Ismael Kemal Bei declared the independence of Albania from the Ottoman Empire, the major powers became suddenly very interested in this area. Austria-Hungary hoped to obtain great influence over the new state and wanted to send instructors for the infantry but Italy attempted the same. Supported by British diplomats they also sent instructors. An Italian Major was sent to Albania and immediately became a citizen there. The instruction of the Gendarmerie was under the auspices of Dutch officers. Rappaport's contacts made it possible that Austria-Hungary received however the ultimate control of artillery development, some instructors were sent and Albania purchased some mountain guns from the Skoda factory. The Albanians desired to have an Islamic ruler like the nephew of the Sultan Halim Eddine and when the two con-men, Otto Witte and Max Hoffmann landed there disguised as Halim Eddine and his adjutant they were welcomed as the new leaders. The coronation was magnificent, the diplomats of all the major powers were in attendance with one exception, the representative of Austria-Hungary! Rappaport was the only one who recognized the swindle before the others and had sent his instructions in time. 48 hours after the two swindlers landed in Albania the con-trick was over, they escaped with the state treasure after having declared war on Montenegro and having spent two splendid nights at the harem and having held up to ridicule the entire diplomatic society there! Alfred Rappaport, meanwhile promoted to Generalkonsul 1st class on the 16th of December 1912, received the knight's cross of the Order of Leopold on the 30th of December 1913. 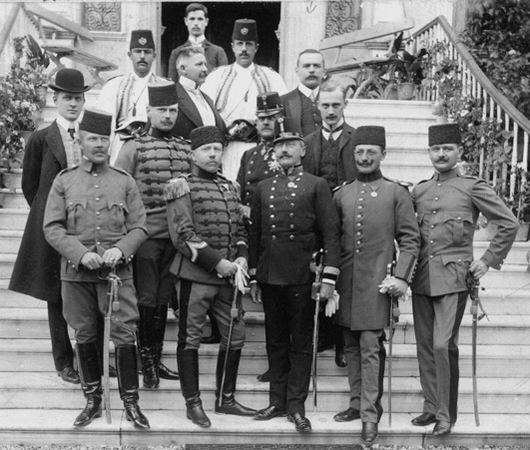 After this diplomatic disaster the major powers agreed to have Prinz Wilhelm zu Wied appointed "Mbret" or sovereign of Albania. Ultimately his reign was only between March and September 1914. It was rumored that the Prince would receive some officers from Romania as instructors for his army. Conrad von Hötzendorf and Rappaport agreed that this could not be in the interest of the Dual Monarchy and together with the Evidenzbureau (military intelligence) they managed to secretly transport 50,000 old Mauser rifles as a present to the Albanian tribal chief. This was remarkable because the k.u.k. army did not have enough rifles and so they had to "borrow" them from the Germans! Urbanski from the Evidenzbureau talked "unofficially" with Moltke, who finally received Kaiser Wilhelm's permission, and both sides agreed not to inform their particular foreign ministers! During this delicate month Generalkonsul Rappaport received the commander's crosses with breast stars of the Prussian Order of the Crown and the Papal Order of Saint Gregorius and the Grand officer's set of the Order of the Crown of Italy. When the war started in 1914 the northern parts of Albania were occupied by k.u.k. troops while the southern part of the country was occupied by Italy. Prince Wilhelm zu Wied created in exile the Order of the Black Eagle and awarded it between 1915 and 1922 in some rare cases. This order, probably the most rare order of modern history  was produced by the court jeweler Willibald Kluge at Berlin and awarded for outstanding merit by the Albanian state. For instance the Grand cross was awarded 6 times and the Commander's cross with breast star only 4 times. In March 1915 Generalkonsul Alfred Rappaport received this commander's cross with star together with the Enthronement Medal of Prince zu Wied. Some month later he received another extremely rare decoration, the Ottoman Iron Crescent with the ribbon for noncombatants.

In March 1916 he was honored with his ennobling to "Ritter von", which is a fine example to describe the procedures of ennoblement at the end of the Austro-Hungarian Monarchy: If someone received the honour to be ennobled  it was commonly granted "taxfrei" or tax-free which meant that one did not pay for the honour but this didn't mean that it was free! In modern terms 100 Kronen is worth about 350 Euros. For the writing of the diploma, in the rank of Fürst, one had to pay 3,240 K, for a Graf  or Count 550 K, for a Freiherr or Baron  440 K, for a Ritter 400 K and finally for the simple ennobling to "von"  330 K and additionally a further 210 K for the words "Edler von". The individual had to send in his papers including a curriculum vitae with his suggested coat of arms as a full colour painting with description. In the case of Rappaport the desired device in Greek letters was refused and he changed it into the Latin motto "NOLITE IUDICARE SECUNDUM FACIEM". In addition to this fee every honored individual could choose an additional word after his name, the so-called "Prädikat". For this particular word one had to pay as a Fürst 2,520 K, as a Graf 1,260 K, as a Freiherr 630 K, as a Ritter 315 K and finally as common noble 210 K. dutasteride look here If one actually desired such a Predicate and in the case of Rappaport he did, he had to enclose with his papers 3 suggestions of such a Predicate with the particular reasons why he desired them. These suggestions were examined and if a place with this name existed within the borders of the Austro-Hungarian Empire or the name was used by another noble family the suggestion was refused and the authorities chose one. Rappaport suggested "Drineck" (named after the river in Albania), "Arbengau" (after the Latin word Arbanum for Albania) and "Arward" (after a river in Macedonia), Drineck was rejected because this was the name of a village in Bohemia and finally Arbengau was selected. In the end Generalkonsul Alfred Rappaport Ritter von Arbengau had to pay 715 Kronen or about 2.500 Euros for his "taxfreie" ennobling!

In October 1917 he was again honored. He received the 2nd class of the War cross for Civilian Merit. After the end of the war he was one of the few department chiefs who were employed in the new Staatsamt für Auswärtige Angelegenheiten (State Office for Foreign Affairs) as head of the political department. However when the Staatsamt was reorganized into the Bundesministerium für Äußeres in 1920/21 he was retired at just 52 years of age. During the following years he wrote many articles with regard to foreign affairs in several magazines and newspapers and published his memoirs of his time in Macedonia as a book with the title "Au Pays des Martyrs". His last article regarding ennobling procedure was published in the lawyers-magazine in the Spring of 1938. Today the Swiss banks publish a so-called "Holocaust List" on the internet, showing all bank accounts from Swiss banks or insurance companies which have not been touched since World War 2 and  probably belonging to victims of the Holocaust. One can find Alfred Rappaport (with matching date of birth) from Vienna on this list and this seems to be remarkable because he was no victim of the Holocaust. His death was reported to the local authorities on the 11th of October 1946 and at this time he had still lived at his flat in Vienna's 9th district!