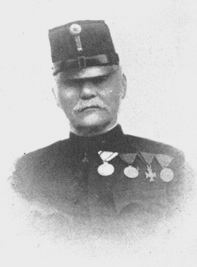 Michael Puhalo was born in 1818 at Brlog in Croatia. (Unlike to his famous son Generaloberst Paul Puhallo von Brlog he always spelt his name with one "l" on official papers, even when both appear at the same time in the same source!) Coming from the area of the old military border he did not "volunteer" for service in the army as he was in the regiment from the day he was born. The 1st Grenz-Bataillon "Otocaner" of the Carlstädter Grenz Infanterie Regiment number 2 (border infantry) had the headquarter of it's 10th company located at Brlog and so Michael Puhalo entered military service as a common soldier with this unit. In 1848, meanwhile promoted to Feldwebel, he first saw action with his battalion during the five days of street fighting in Milan from the 18th to the 23rd of March and took part during the four month defence of the fortress of Peschiera where he received his first wounds. In 1849 the battalion was transferred to the Hungarian theatre as part of the Korps of Graf Schlik. On the 4th of April 1849 a well located Hungarian artillery unit troubled the loyal troops causing heavy causalities. Leutnant Paul Jurkovich decided against his general orders, that a bayonet attack could be successful and after some words with his, Feldwebel Michael Puhalo they chose 30 volunteers and commenced an heroic attack. With only fixed bayonets they assaulted the hill under heavy fire from the superior Hungarian troops. Just at the beginning Feldwebel Puhalo received his first wound but he remained with his men encouraging them with his example and stormed the hill with the leading troops. When they reached the top of the hill a bloody close combat ensued where Feldwebel Puhalo received his second wound on this day but again refused to leave his men alone in battle. Finally the small group of Leutnant Jurkovich captured 6 larger and 3 smaller guns, a howitzer and 4 ammunition wagons including 4 officers and some soldiers. For this outstandingly heroic action Leutnant Paul Jurkovich received accelerated promotion to Oberleutnant and was honored during the 153rd Promotion with the knight's cross of the Military Maria Theresian Order on the 29th of June 1849. Feldwebel Michael Puhalo was honored with the Golden Bravery Medal and received "exceptionally" the promotion to Unterleutnant 2nd class on the 21st of August 1849.

It would take him about 10 years to reach the higher pay grade as an Unterleutnant 1st class! During the campaign in 1859 two battalions of his regiment were engaged in Italy, one with the 3rd army at Magenta and one with the 7th army at Solferino suffering heavy causalities of 9 officers and 195 men. Leutnant Puhalo stayed with his unit in Dalmatia as part of the security forces and although there was no fighting reported he received a serious wounded there. His files do not contain any further information about this but finally this and his previously received wounds forced him to leave active services and he was retired as an invalid on the 31st of December 1861 to his home at Brlog.

On the occasion of his 90th birthday he was honored by being ennobled. As a citizen of Croatia he was elevated to the Hungarian nobility with the predicate "von Brlog". On the 6th of August 1910 he received "als Zeichen Allerhöchster Gnade" the honorary promotion to Oberleutnant des Ruhestandes mit Titel und Charakter. At the age of 95 Michael Puhalo von Brlog died at his home in Brlog on the 6th of March 1913.