Johann Mikl was born on the 18th of April 1893 in Zelting, a suburb of the Styrian town of Radkersburg on the present day border with Slovenia. As a child he mastered the Hungarian and Slovene languages and after attending the local schools at Radkersburg he entered the Landwehr cadet school in Vienna in 1908 followed by his education at the Maria Theresia Military Academy at Wiener Neustadt from 1911 until 1914. Commissioned as a Leutnant on the 1st of August 1914 he was assigned to Landwehr Infanterieregiment Number 4 based at Klagenfurt. Mobilized on the 28th of July 1914, Landwehr Infantry Regiment Number 4 under the command of Oberst Friedrich Eckhardt von Eckhardtsburg was subordinated to the 22nd Landwehr Infantry of III Corps and entrained for Galicia. After deploying by rail to Stryj the regiment saw its first action during the battle on the Zlota Lipa river where it suffered heavy casualties and Mikl was seriously wounded in the chest. Mikl remained in hospital until the 15th of April 1915 and was then assigned to the replacement battalion as an instructor. Returning to Landwehr Infanterieregiment Number 4 in May 1915 as an Oberleutnant (01 May 1915) he saw further action on the Pruth sector where he was again wounded on the 3rd of June whilst his company covered the withdrawal of the regiment. He was however able to remain with his company and was subsequently awarded the Military Merit Cross 3rd Class with War Decoration on the 16th of October 1915.

With Italy's entry into the war Landwehr Infanterieregiment Number 4 was transferred during the autumn of 1915 to the upper reaches of the Isonzo as part of the 44th Landwehr Infantry Division and Oberleutnant Johann Mikl was now the 2nd company's commander. The regiment took up positions from Rombon up to Javorček. It covered both the roads from Predil and also from Trente (Vrič Pass). The left flank of the regiment (2nd Battalion) was positioned south of the Isonzo River on Javorček, the centre (3rd and half of the 1st Battalion) took the positions in the valley with the main support point on Ravelnik Hill. The right flank was situated on the steep hillside of the mountain of Rombon on which the 1st Company were positioned on the summit. Mikl was entrusted with the operation to recapture the strategically important position of Čukla and on the 12th of February 1916 he successfully carried out his assignment for which he was awarded the Order of the Iron Crown 3rd Class with War Decoration on the 22nd of March 1916. During the following Trentino offensive the 44th Landwehr Division was employed in the Seven Communities sector and Mikl was awarded the Bronze Military Merit Medal  on the 26th of August 1916 for his part in the taking on Hill 1363 on Monte Cengio.

As a consequence of the Brussilov offensive on the eastern front, Mikl found himself with his regiment and the 44th Landweht Division again in June 1916 in Galicia. The assignment to Galicia was however short-lived. By late August he was back on the Isonzo front where the regiment participated in the 8th, 9th, 10th and 11th battles of the Isonzo. Wounded again on the 10th of October 1916 he was assigned to the replacement battalion followed in the summer of 1917 by a transfer to the reserve officers' school of the VI Corps as an instructor for three months. Landwehr Infanterieregiment Number 4 was renamed as Gebirgsschützenregiment Nr. 1 on the 11th of April 1917 as part of the overall renaming of Austrian Landwehr regiments to reflect their performance in the war. Mikl participated in the Caporetto offensive and the pursuit to the Piave river and in the following May was sent on a staff course followed by his assignment as a supply staff officer in the Ukraine until the war's end. Wounded five times during the war he had in addition to the awards mentioned above also won the Silver Military Medal (Signum Laudis) twice and the Karl Troop Cross.

Following the collapse of the Monarchy Mikl returned to Styria and fought in the border battles against forces of the new South Slav state where he was particularly successful in defending his own home town of Radkersburg for which he would in 1930 be made an honorary citizen. He was awarded both the general and Special Carinthian Crosses for Bravery and on the 11th of June 1920 was accepted into the new Austrian Bundesheer in Alpenjägerregiment Nr. 11. Transferred to Radfahrbataillon Nr. 5 on the 7th of October 1920 where he would remain until 1935, he was promoted to Hauptmann on the 1st of January 1921. Sometime after his acceptance into the the army of the new Austrian state he changed his name from Mikl to Mickl. Promoted to Major on the 25th of September 1928 he was assigned as an attached staff officer to the headquarters of the 3rd Brigade at St. Pölten on the 15th of February 1935 until finally accepted as a general staff officer on the 14th of August followed by his promotion to Oberstleutnant d.G. on the 4th of January 1936. He served as a general staff officer at the headquarters of the 3rd Division until March 1938. 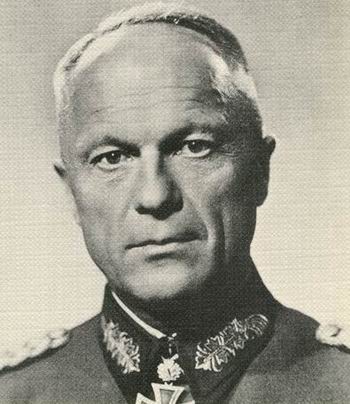 Following the annexation of Austria in 1938 by Germany, Oberstleutnant Mickl was transferred into the German Wehrmacht in his then rank of Oberstleutnant and from the 12th of May until mid August 1938 attended a course at the Panzer troops school at Wunstorf. Following a short attachment to Panzerabwehr-Abteilung 41, he assumed command of the 2nd Light Division's Panzerabwehr-Abteilung 42 at Gera. He took Panzerabwehr-Abteilung 42 into action during the Polish campaign in September 1939 and was awarded the Iron Cross 2nd Class.  The 2nd Light Division was converted into the 7th Panzer Division on the 18th of October 1939 and under the command of Generalmajor Erwin Rommel achieved spectacular success in the 1940 campaign in the West. Mickl was promoted to Oberst on the 1st of June 1940 and awarded the Iron Cross 1st Class on the 15th of that month. Following an attachment to Panzer-Regiment 25 he assumed command of  Schützenregiment 7 on the 10th of December 1940 until the 31st of May 1941. He then took over command of Schützenregiment 155 on the 1st of June and deployed with this regiment to North Africa that September. During the battle of Sidi Rezegh he was captured by New Zealand troops on the 26th of November 1941 but managed to escape two days later with 800 other German POWs after overpowering the camp commander. Johann Mickl was subsequently awarded the Knight's Cross of the Iron Cross on the 13th of December 1941.

Oberst Mickl left Africa and after a period of rest and recuperation assumed command of the 12th Schützen-Brigade of the 12th Panzer Division on the 25th of March 1942 where he saw action on the northern sector of the Russian front for which he would be awarded the Oakleaves to the Knight's Cross of the Iron Cross on the 6th of March 1943. Placed in the Führer Reserve on the 26th of January 1943 he was promoted to Generalmajor on the 1st of March 1943. On the 15th of May 1943 he was appointed as acting commander of the 11th Panzer-Division which he led during the battle of Kursk until again being placed in the Führer Reserve on the 12th of August 1943. His last command was of the 392nd Infantry Division (Croatian) which he assumed on the 1st of September 1943. He supervised the formation of the predominantly Croatian manned division at the Austrian training area at Döllersheim and the division then transferred to Agram in January 1944 for further training prior to deploying on anti partisan operations in Croatia and on the Dalmatian coast. Promoted to Generalleutnant on the 1st of April 1944, Johann Mickl commanded the division for just over another year until he was severely wounded in the head during the difficult fighting in the Vratnik Pass near Senj on the 9th of April 1945. Although evacuated to a military hospital at Rijeka he died of his wounds the following day.